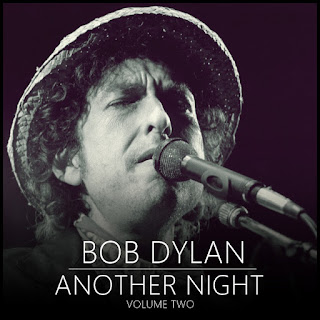 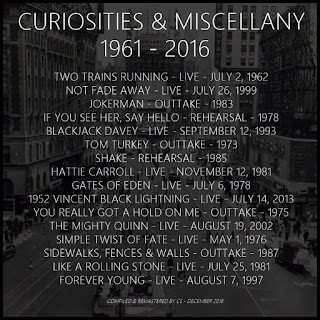 Welcome to the final installment of The Thousand Highways Collection. The previous volume of this series, Another Night Volume One, established the formula for this volume - a compilation of assorted curiosities and notable performances that did not make it onto more thematically coherent titles. Volume Two has some real humdingers, so open up those ears and listen in.

"Two Trains Running" is an old Muddy Waters track, and Dylan does it justice in this early solo performance from Montreal's Finjan Club. As with many of the singer's earliest uptempo songs, he powers along the tempo with a rhythmic tapping that's luckily been preserved by this crisp recording.

"Not Fade Away" is another cover, this time originating with Buddy Holly. Holly had been quite influential to the young Bob Dylan, as indicated by the Martin Scorcese's 2005 documentary, No Direction Home. Still, few of Holly's own compositions had been played by Dylan over the years. The Never-Ending Tour altered this, though, and a number of Holly's tracks entered the setlist between 1988 and 2016; none appeared more often, though, than the heavily rhythmic "Not Fade Away." This rendition from the much-loved Tramps show in 1999 is particularly well-executed.

"Jokerman" was the lead song on 1983's Infidels, and became quite a classic in its own right. This alternative version offers a very different vocal performance and a handful of lyrical variants. Instrumentally, it's quite similar to the final version.

"If You See Her, Say Hello" may sound familiar, as a roughly identical arrangement appeared on an earlier Thousand Highways compilation covering rehearsals from 1971 to 1989. This version, though, features a slightly more prominent harpsichord and violin, which improves the strangely baroque sound of the arrangement. It's a shame this didn't stay in the set past the first weeks of 1978's World Tour.

"Blackjack Davey" was one of the standout songs on Good As I Been To You in 1992, but only appeared live the following year. It's a very old song, and was also performed by Bob Dylan at the start of his career in 1961. Like "Barbara Allen" to "Scarlet Town," "Blackjack Davey" served as an inspiration for "Tin Angel" on Dylan's Tempest record from 2012. This arrangement is interesting, since live versions from 1993 are the only time when Dylan played the song with (limited) instrumental backing.

"Tom Turkey" is an outtake from 1973's Pat Garrett & Billy The Kid. Like other songs recorded for that soundtrack, it's effectively an excerpt from the "Billy" narrative with some unique instrumentation. Mostly instrumental, it includes only two verses of the "Billy" along with some intriguing harmonica fills.

"Shake" was an original Bob Dylan composition based roughly on Roy Head's "Treat Her Right." It was played briefly in 1985 and 1986 at the first Farm Aid show and on tour with Tom Petty & The Heartbreakers. This is the clearest recording, though even here the lyrics seem unfinished. It's quite groovy, if nothing else.

"The Lonesome Death Of Hattie Carroll" is one of only a handful of performances of this song from my favorite Bob Dylan touring year - 1981. Like most of the year, it features a compelling, rich vocal performance and a loose arrangement.

"Gates Of Eden" was played very rarely from 1965 to 1988, and one of the finest outings for the song was as a solo performance in 1978. This spot of the setlist was typically reserved for "It Ain't Me, Babe," but other classic 1960s tracks featured a few times, including "Fourth Time Around" and "A Hard Rain's A-Gonna Fall." Unfortunately, only "Gates Of Eden" was preserved with a lovely recording. Luckily, the performance is excellent.

"1952 Vincent Black Lightning" barely saw the light of day. It was recorded by an intrepid amateur taper in 2013, and only began to circulate two years later in a handful of alternative mixes. There are some chatty audience members near the tape recorder, but they do little to reduce the passion of this unique one-time performance of Richard Thompson's motorcycle epic.

"You Really Got A Hold On Me" was played by Bob Dylan and Bette Midler in the midst of a recording session for Midler's Songs For The New Depression. Much of the session consists of shaky takes on a rewrite of "Buckets Of Rain," but the two spontaneously burst into an equally shaky (yet delightful) performance of this Smokey Robinson gem. Bob Dylan has spoken of his admiration for Robinson, but this is one of the only times he played a song written by that American icon.

"The Mighty Quinn" is one of the most celebrated songs from The Basement Tapes, but the writer only sang it live a few times over the past fifty years. Other versions can be found elsewhere on The Thousand Highways Collection, but this is the only time that the song featured Dylan's excellent backing band harmonizing as it did on bluegrass classics from 1998 to 2002.

"Simple Twist Of Fate" is a heartbreaking song, but rarely has it been performed with the pathos instilled on this night in Hattiesburg during the Rolling Thunder Revue. It sounds fairly similar to the style used to great effect earlier in the tour on "If You See Her, Say Hello," though this song is not nearly as re-written as its Blood On The Tracks companion.

"Sidewalks, Fences & Walls" did not circulate for decades, but this outtake from Down In The Groove finally appeared in the taper community during the 2000s. It's a straightforward soul song infused with depth by a passionate vocal performance. The sound is less than stellar, as it only circulates as a fairly compromised lossy recording, but we should be grateful that it appeared at all.

"Like A Rolling Stone" is my favorite rendition of a Bob Dylan classic. It's not quite as tight as earlier performances from the 1981 tour, but it makes up for that looseness with one of Dylan's most inventive, passionate, shredded vocal tracks you'll ever hear. You can point to moments like this as one of the reasons that the singer's voice deepened and lost some of the range it displayed in the 1970s, but at least we received incredible recordings like this one from the singer pushing his art outside of his comfort zone.

"Forever Young," a sentimental song written by the singer for his child, is as appropriate an ending as you could ask for on this long listening journey. Happily, it features one of Dylan's unique lead guitar performances and a touching harmonica solo.

I hope you've enjoyed listening to these as much as I've enjoyed researching, seeking out recordings, and finding the very best tracks to remaster and compile for this collection. It's been lovely, and until next our paths cross, keep yourself healthy and listen to some good tunes.