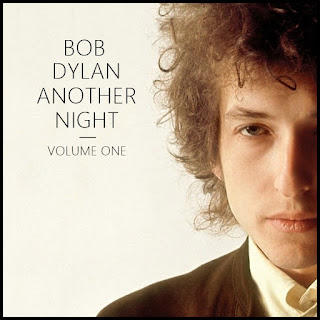 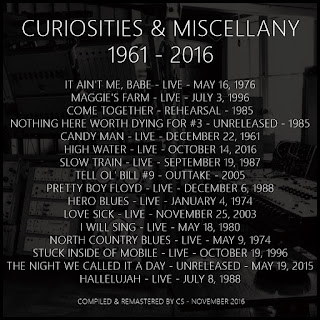 We've almost come to the end of the line with this album. It represents the first in a two-volume set of curiosities and miscellaneous recordings from throughout Bob Dylan's career. For one reason or another, these either hit the cutting room floor during my compilation of earlier releases or were somehow out of the scope of those projects. As with One More Night, an earlier five-volume release in the Thousand Highways Collection, I would like to walk through these with you one by one.

It Ain't Me, Babe

This song was originally the lead song on my compilation of the second Rolling Thunder Revue, but got cut when I wanted a more energetic start to the album. As with the singer's other performances from 1976, "It Ain't Me, Babe" represents some the best vocals in the man's career. Most, if not all, of the 1976 concerts started with a couple of acoustic songs, I thought it was a pleasant opening to this release.

This song was one of several played with Dave Matthews' violin player while Bob Dylan and his band were touring with that artist in 1996. You can find the other recordings on my 1996 collection, Roadhouse Hymns.

This and the next song were both part of a surprising set of recordings unearthed in 2016. Neither had surfaced, or had even been rumored, prior to the appearance of those sessions. This cover of The Beatles classic song originates with a rehearsal session in preparation for Bob Dylan's 1986 tour with Tom Petty and the Heartbreakers. Dylan ad-libs quite a number of amusing lines, borrowing only the song's arrangement and a skeletal set of original lyrics.

Nothing Here Worth Dying For #3

Quite a few new songs were discovered on a tape purportedly originating with sessions that occurred after Bob Dylan wrapped up Empire Burlesque. Most, including this one, are effectively sketches of works in progress. Sadly, none are known to have evolved into more fleshed-out final releases. "Nothing Here Worth Dying For" is the best of the bunch, and this take is more extensively arranged than the prior two. You can hear hints of "In The Garden" in the mid-song chord progression and "2x2" in some of the evidently improvised lyrics.

This song appears on the best-sounding of Bob Dylan's earliest recordings, the Minneapolis Hotel Tape of 1961. The arrangement here is reminiscent of the version recorded by Gary Davis, who Dylan had met earlier in 1961.

In 2016, Bob Dylan was contracted to appear at an event designed to gather the greatest performers of the 1960s. Unsurprisingly, while he altered his setlist to include a handful of classic compositions, the rest of his two sets were made up of more recent songs. In particular, the new arrangement of Love & Theft's "High Water" drew this listener's attention. It was stripped of its typical banjo riff and instead depends upon a sparse guitar and drum-driven arrangement reminiscent of "Cold Irons Bound" in 2009.

1987 was not the best year for Bob Dylan's live performances, but the artist was undoubtedly pushing himself to experiment with his back catalog throughout the year. "Slow Train," unfortunately, would never again be played live after this year's tour with Tom Petty and the Heartbreakers. Happily, this excellent recording captured a moody, atmospheric performance highlighting the skills of Dylan's backing vocalists and rhythm section.

The North Country soundtrack featured one of Bob Dylan's best songs of 2005, which was impressive in a year featuring the recording of Modern Times. We are lucky that the entire session circulates, and other alternative versions of the evolving song can be discovered on The Bootleg Series Volume 8: Tell Tale Signs and the earlier Thousand Highway compilation, Down The River: 1999 - 2012. This version hews closer to the North Country version than those two recordings, but features a swinging rockabilly vibe that was filtered out by the final take.

Bob Dylan's ties to Woody Guthrie were evident in his first album, but they were not emphasized throughout much of the man's middle years. It was fairly surprising, then, that he contributed a new recording to 1988's Folkways: A Vision Shared, A Tribute to Woody Guthrie & Leadbelly. He had earlier accompanied Ramblin' Jack Elliott on guitar at a live performance of this song in 1975, but the 1988 album was the first time listeners got to hear Dylan himself sing the song, which lionized the controversial early 20th Century outlaw, Pretty Boy Floyd. The only extant live vocal performance of the song dates from later in 1988, from an acoustic set played at a Bridge School Benefit Concert.

This song, which had been performed but never released in the early 1960s, had entirely disappeared from Bob Dylan's live repertoire by 1965. Strangely, it was pulled out of retirement briefly to open a couple of shows in 1974 when Dylan got back on the road after eight years away. It did not stay in rotation, though, and this version is the only listenable recording of the song from that tour. One wonders about why it fell from favor, since this performance is characteristic of the tour's early liveliness.

In a 2014 interview, Bob Dylan asserted this as one of his only songs that could measure up to the timelessness and thematic content of Frank Sinatra's recordings. I don't think he was being generous enough to his other songs, but it's hard to argue with the timelessness of "Love Sick." From its earliest premier in 1997, the song has been one of the singer's most consistently performed songs, and this version from 2003 bears the unmistakably rough, electric aesthetic of that year. It narrowly missed inclusion on earlier compilations Piano Blues and Barroom Ballads and Wicked Messenger, so I'm happy to finally publish it here on Another Night.

This song was only performed on a single night in Akron, Ohio, during a 1980 tour. It was one of the only covers played by Bob Dylan during that year, prior to the Autumn's "Musical Retrospective" tour. The recording is less than ideal, but I think it conveys the enthusiasm and passion that characterized the singer's 1980 concerts.

Like "Hero Blues," this song had rapidly fallen out of Bob Dylan's repertoire after the end of his early solo performances. Similar to the aforementioned song, it appeared again in 1974 for a single show at the Friends of Chile Benefit Concert. Much of that recording suffers from poor recording and questionable performances, but this song ends up feeling all the more authentic for its seemingly off-the-cuff rendition.

Stuck Inside Of Mobile With The Memphis Blues Again

There isn't anything inherently remarkable about this 1996 show or recording, but the arrangement of this song is, as far as I know, entirely unique. For some reason, Dylan and his band slow the song down to a crawl, seemingly influenced by 1970s funk performances. It's a shame it never had room to develop, because this rendition is a bit rough and under-rehearsed. Still, the groove is fairly entrancing.

The Night We Called It A Day

David Letterman ended his long-running late-night television program in 2015, and Bob Dylan was one of a handful of performers requested by the host for his final shows. Unsure of what to expect, listeners were grateful to receive one of the most beautiful readings of "The Night We Called It A Day," which had been released earlier in the year on Shadows In The Night. The vocal commitment was unsurprising to long-time fans of Bob Dylan, who would likely recall his blistering performance on the Letterman show in 1984.

This Leonard Cohen song became extraordinarily well-known through the early 2000s thanks to numerous covers by a variety of performers. Jeff Buckley's 1994 recording from his album Grace remains the definitive one to my ears, but I'm sure everyone has a favorite (or is entirely sick of the modern-day standard). Before most of these, though, Bob Dylan played the song at two shows in 1988. His performance from Montreal, found here, is one of the superlative documents of that year, and I have no idea why it didn't make it onto my earlier Renaissance album, which pertained to the live tracks from 1988. It certainly isn't the band or singer performance, as they are utterly compelling, nor the recording, which is clear. In any case, this collection would be incomplete without including on of the 20th Century's best singers singing one of the 20th Century's best songs.

I hope you've enjoyed the selection here. It's a bit scattered, as you'd expect, but I think it hangs together reasonably well. Return next month to catch the second volume, and the conclusion of The Thousand Highways Collection! Until then, keep yourself healthy and listen to some good tunes.