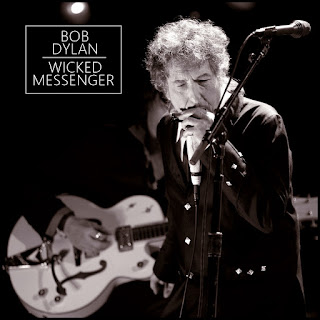 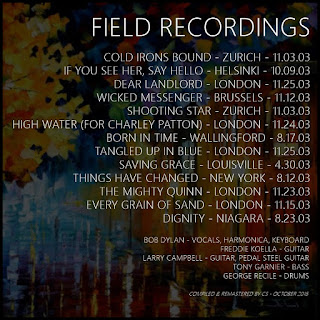 Since compiling my original collection of recordings from Bob Dylan's 2003 Tour of Europe, I have found myself being drawn back to that year again and again. There is some kind of magic in the performances. I'm not sure if it is Freddie Koella's distinctive lead guitar, an inspiration to experiment driven by Dylan taking up the keyboards as his primary instrument in late 2002, or some other element. Whatever the cause, Bob Dylan and his band produced some the greatest music of the Never-Ending Tour throughout 2003.

While many songs here are from the deservedly praised Autumn Tour, a handful appear from earlier in the year. Among them, "Born In Time" is the final rendition of a song that Dylan had played frequently during the preceding decade. He sent it off in style, with characteristically sweeping guitar lines from Freddie Koella. "Saving Grace" had only recently returned to being performed in concert after a twenty year hiatus, and would disappear from regular appearances again by 2005. "Things Have Changed" is a roaring performance that teeters precariously on the edge, as do so many of Dylan's best performances from this year. "Dignity," sadly, is sourced from MP3, but that is the only circulating version of an alleged soundboard tape leak from the same source as Tell Tale Signs' marvelous "High Water." Other renditions of this arrangement, from the following year, appear elsewhere in The Thousand Highways Collection, but I enjoy it so much that I've tried to include it on compilations at every opportunity; please forgive me this indulgence!

As for the Autumn Tour, it almost seems a shame to highlight it again after covering it extensively on Piano Blues and Barroom Ballads, but the tour really is that great. Two songs from Zurich appear here, "Cold Irons Bound" and "Shooting Star," representing perhaps the single best night of the tour; what it lacked in adventurous setlists it makes up for in highly engaged vocals. Some of the rarer songs of the tour are included as well - "Dear Landlord," "Tangled Up In Blue," and "The Mighty Quinn," all from London, are typical of the experimental, rhythmically intense style that Dylan and his band produced throughout the year. The other songs, while less surprising, are no less magical. "If You See Her, Say Hello" may be the best this song sounded since 1978. "High Water" sounds very much like the version released on Tell Tale Signs, but the band has had a few extra months to perfect the arrangement further. Finally, "Every Grain Of Sand" is one of the best songs that Dylan ever wrote, and he performs it here with the delicate approach that it demands.

I'm just so proud of the final result on this collection of recordings from 2003. The bootleggers really went above and beyond in delivering perfect, crystal clear tapes. Similarly, Bob Dylan and his band were at one of their peaks, and I'm not sure he'd match this level of performance again until the following decade. I hope you enjoy the compilation as much as I do.