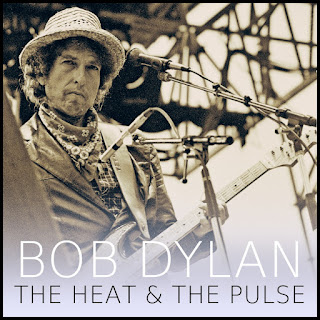 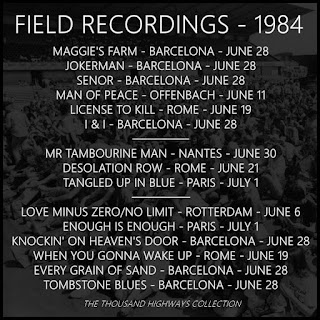 Welcome to our coverage of Bob Dylan's 1984 Tour of Europe. This is a special request, and I hope it lives up to expectations.

This tour had not yet been covered on the blog because it's not one that I am especially fond of. It was also represented by an official release on Columbia Records, Real Live. Given that a handful of tracks from the tour had found their way into The Thousand Highways Collection on my series of miscellaneous compilations, One More Night, or been part of my release focused on Dylan's sessions from 1983 to 1984, Faithful, a compilation dedicated exclusively to 1984 felt unnecessary. Still, a fan of the site talked me into reviewing my tapes, and I was pleasantly surprised.

Much of the tour is uninspired, but there are gems among the sets. The setlists themselves were actually fairly interesting, with a selection of songs drawn from throughout Dylan's recording career. The newest songs, as is typical with this artist, were the highlights, but older songs were often played well. "Knockin' On Heaven's Door," for example, features what I would consider the fulfillment of its reggae arrangement played with from 1978 to 1981; it's tighter and more compelling here than even the lovely renditions played three years earlier. Even the Gospel period was represented through the performance of songs like "Heart Of Mine" and "When You Gonna Wake Up," though only the latter appears here.

Interestingly, a handful of songs were written specifically for the tour. This is something that Bob Dylan has not tended to do, with notable exceptions - "Tell Me, Momma," "City Of Gold, " and "Ain't Gonna Go To Hell For Anybody" come to mind. This tour yielded fewer stellar results, but while the rehearsals reveal two songs that wouldn't ever be played live ("Almost Done" and "Dirty Lie"), three songs were either written or re-written and played on the road - "Enough Is Enough," "Tangled Up In Blue," and "Simple Twist Of Fate." The first never seems to have quite found a defined set of lyrics, as they vary from night to night; more than anything else, the song feels like an inspired riff on "Don't Start Me Talkin'", which Dylan had recently played to a live television audience on the David Letterman Show. The second song, "Tangled Up In Blue," is one of the most consistent highlights of the tour. A version from the United Kingdom was released on Real Live, and I included an alternative version as a bonus track elsewhere on The Thousand Highways Collection. Even with these earlier releases, it couldn't go unrepresented here, so the lovely performance from Paris is included; this is the recording discussed by Paul Williams in Performing Artist, Volume Two. Finally, "Simple Twist Of Fate" was extensively reworked and still never became a well-defined song. The most effectively realized version I found was from Rome, but the recording is indistinct and many of the lyrics are lost. I've included it as a bonus track.

Concerning the history of the tour, it was originally intended to be Bob Dylan's first tour of South America. Clearly, the continent was occupying his thoughts as it turned up repeatedly in his lyrics throughout the preceding few years. Unfortunately, the plans fell through, and he instead turned his eye to Europe. The concerts were performed to massive crowds in stadiums, and this lack of intimacy threatens to come through on many of the tapes - Dylan can sometimes sound like a broad caricature of himself. Still, the intent to please audiences shines through just as brightly, and offers such beautiful results as the version of "Love Minus Zero/No Limit" contained on this compilation, along with nightly examples of Dylan actually coaching the audience to sing along to "Blowin' In The Wind" (not included here). I'm not sure if that degree of audience outreach is unprecedented in his career, but it's certainly rare! Alongside him for much of the tour was Santana, and Joan Baez appeared at some of the shows as well. On the last few nights, he was joined onstage by Bono and Van Morrison, among others.

Notably, his band for this tour included guitarist Mick Taylor, formerly a member of the Rolling Stones. Taylor at times plays a bit too prominently, flavoring the recordings with a somewhat generic stadium rock sound, but at other times finds exactly the right tone to enhance the song. Key examples of the latter include the distinctly Muddy Waters sound on "Maggie's Farm," a distorted slide performance on "Man Of Peace," and an intense solo on "When You Gonna Wake Up," another song largely re-written for this tour.

The solo set is intriguing, as it is really the last time Bob Dylan would offer compelling solo performances. Though he would return to the format briefly on his 1986 tour with Tom Petty and the Heartbreakers, the effect was less successful; from 1987 on, he would exclusively collaborate with one or more other players during his acoustic sets. Happily, 1984 presents an excellent picture of the man as a solo artist. The version of "Mr. Tambourine Man" is reminiscent of its outings in 1966, combined with the vocal experimentation of 1981. "Desolation Row" is heard in one of only a handful of solo renditions outside of 1966 - it was played in this format, less successfully, on 1974's tour with The Band. "Tangled Up In Blue," discussed above, was an extraordinary piece of work every time he played it in 1984, and Paris was no exception.

Some significant edits were carried out in shaping this set of recordings, and I hope that doesn't upset any purists checking in. "Man Of Peace" needed to be slowed down, much to my sadness, as I loved the speed but disliked the artificially high-pitched vocal tone on the circulating recording; I don't know how off it actually was, but the result of my tinkering is slightly more natural than it had originally sounded. Reverb and equalization was required for "Love Minus Zero" and "When You Gonna Wake Up," as the first was muffled and the second was a bit too thin. A splice was necessary in "Mr. Tambourine Man," a the tape dropped a portion of the second chorus - I spliced in some tape from later in the song, but I don't find it conspicuous when listening. Finally, I added some audience noise to the end of "When You Gonna Wake Up" and "Tombstone Blues." In the former, the end was too abrupt, and in the latter, I wanted it to function as an end to the CD. In both cases, the spliced audience noise was sourced from the same show to maintain consistency of sound.

Please enjoy the final result. In spite of my initial skepticism, I'm very proud of the compilation! It's a very pleasant summer listen, much like Dylan's other live output from 1981 to 1986.

As ever, keep yourself healthy and listen to some good tunes.