SC93: Live At The Supper Club 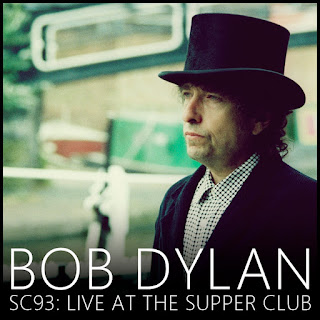 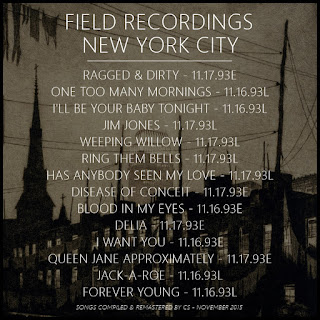 SC93
Live at the Supper Club

Bob Dylan’s performance at New York City’s Supper Club in November 1993 has gone down in legend as one of his more notable series of concerts. This is due largely to the very unique setlists, acoustic arrangements, and the circulation of excellent soundboard recordings.

I’ve collected the best of these here, and applied a bit of reverb to sweeten the sound, giving it a less harsh aural environment. The vocals are still mixed to the front, and the rhythm section is still crisp. In particular, dig the bass on “Jim Jones.” Spectacular stuff.

A handful of tracks here have appeared on previous Thousand Highways compilations, but they still represent the finest performances from this four night residency. Including them in one place presents a very pleasant listening experience from beginning to end, and I’d encourage the wine-drinking listeners to pour themselves a glass to accompany this collection.

As a word of warning, this is not the best era for Dylan’s voice, and it can come across a bit shrill. There were also a variety of digital flaws present on the soundboard tapes, which I’ve done my best to eliminate with a minimum of intrusion. I think you’ll be happy with the results, as they are an improvement on my earlier efforts with this material.

Highlights of the set include any of the unique songs - audiences of these four shows were lucky to catch the only live performances of “Ragged & Dirty,” “Blood In My Eyes,” “Jack-a-Roe,” and “Weeping Willow.” The Good As I Been To You and World Gone Wrong songs are noteworthy for being played in acoustic band arrangements, even though they appear as solo performances on their original recordings. The singer’s look back into his older catalog is successful as well, with moving renditions of “Ring Them Bells,” “Has Anybody Seen My Love,” “Disease of Conceit,” “Queen Jane Approximately,” and “Forever Young.” “I’ll Be Your Baby Tonight” and “I Want You” receive light but spirited readings, and serve to quicken the tempo of the set. In one of the more interesting arrangements, “One Too Many Mornings” includes a banjo!

I hope you enjoy the collection. It’s been requested often, and I think it will live up to expectations.

Next month, we'll move on to 1995! That was an excellent year for Dylan's acoustic and electric performances, as he played to the strengths of both styles. This website previously covered only the Prague Residency from March, 1995, so December will bring a welcome expansion. Until next time, keep yourself healthy and listen to some good tunes.

Note: The artwork incorrectly assigns "Ring Them Bells" to the late show on November 17. In fact, I believe it originates at the early show on the same day. Nothing on this compilation has been officially released. Kudos to commenter Yama for making me aware of this issue.