Since there is no bonus disc for the month of July, I thought you might enjoy some kind of update. In this case, it will be a brief explanation of pleasant online resources available to the diehard Dylan fans of the world. This is in the spirit of my recommended reading, which you can find here. Be aware that the following resources are in no particular order:

This website has virtually everything you might want to know. The Yearly Chronicles section is a thoughtful analysis of Bob Dylan's artistic output (music, movies, books) divided into pages centered on specific years. It offers a remarkably detailed breakdown of live songs played on a tour, recommended shows, and even an outline of unreleased content becoming available. The Still On The Road page is my favorite part of the site, though, and functions as the primary resource from which I pull my information. It is a text list of every show played by the artist, along with songs played, band information, notable firsts or last, transcribed banter, and more. You really couldn't ask for a more helpful resource than this, and I wish more musicians had such inspired fan projects!

This one is comparatively new to me, though I have been aware of it for years. It is a catalog of Bob Dylan unreleased recordings, which is each assigned a number. An analysis of the recording is presented, along with resources like relevant text files and checksum data (for my fellow archival nerds out there). This person has essentially generated a cataloging standard for unreleased recordings, and it is very helpful when you hear a concert and wonder if an alternative tape exists.

Electric Ladyland is a top-notch website for finding unreleased music. Their search feature is significantly better than Dimeadozen, and the community is very responsive to requests for reseeding concerts. Much of the second round of the Thousand Highways collection was downloaded from fellow fans on this site.

This official website may have seen its best days in the 1990s and 2000s, when its staff was publishing unreleased and rare content via downloadable files, but it's still one of the better artist pages out there. You will find a list of every Bob Dylan song, and a little exploring will take you to lyrics and a list of times the song was played live. It's updated pretty frequently, and features some cool multimedia content (music videos, articles, etc.).

Searching For A Gem is, like Lossless Bob, a wonderful resource for tracking official releases. In the case of my blog, this has sadly led to a handful of intended tracks not making it onto compilations, since they have been officially released in very obscure ways. The orchestral "A Hard Rain's A-Gonna Fall," for example, was released on a European version of the MTV Unplugged Dignity single. Happily, being aware of these releases keeps the material on this website from stepping on anyone's toes and making it fall into more problematic content. I am always impressed at the capacity for comprehensiveness of the contributors to Searching For A Gem.

I hope you enjoy these links. Let me know if I missed anything!

Email ThisBlogThis!Share to TwitterShare to FacebookShare to Pinterest
Labels: Notes 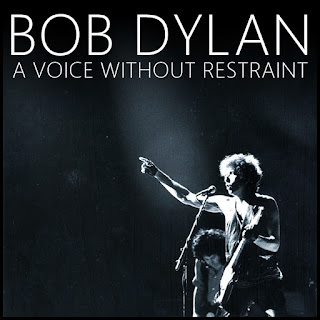 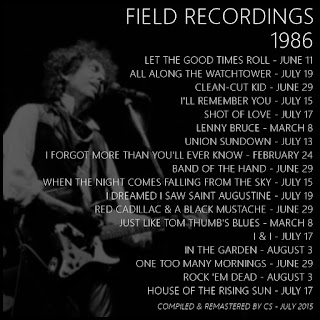 A Voice Without Restraint
Live Recordings - 1986

Welcome to the 1986 Bob Dylan show. This is one of the more intense years of touring, in terms both of shows performed and style of performance; it bears a striking resemblance to 1978 in its nearly unprecedented (until that point) number of concerts, and is quite similar to 1974 and 1988 in the forceful vocal delivery. Don't let that put you off, though! There's plenty of gold in these shows, in spite of the singer's own admission of feeling adrift in 1986 in his autobiography.

Of particular thematic interest is the year's emphasis on 1950s rockabilly songs. These are represented on this compilation by "Let The Good Times Roll," "Red Cadillac & A Black Mustache," and "Rock 'Em Dead." The first is a very well-known early rock tune, but the second and third have more peculiar histories.

"Red Cadillac" was written and recorded by Warren Smith in 1957, but went unreleased until 1973. Others recorded the song between those two years, and Dylan recorded and played live a version of the song in 1986. He would also go on to record a very different version for a Sun Records tribute in 2001, but that is off-limits for the blog since it has been officially released.

"Rock 'Em Dead" is also rather bizarre. Though the song is often referred to as "Uranium Rock," it bears little resemblance to that Warren Smith recording. Notably, it makes no reference to uranium! Instead, it is fairly representative of a writing technique employed by Dylan in the mid-1980s. Much like his re-write of Roy Head's "Treat Her Right" into "Shake," and his re-write of his own song "Someone's Got A Hold Of My Heart" into "Has Anybody Seen My Love," this was largely a revision of a pre-existing song into something different. Arguably, this is the root of the writing technique that the singer would go on to use to excellent effect on "Love & Theft" and "Modern Times."

Prior to the beginning of the Never-Ending Tour in 1988, Dylan played his 1980s songs with regularity, so those are emphasized on this set. "I'll Remember You" and "Lenny Bruce" are offered here in definitive performances. The latter features a lengthy introduction comparing the song's titular figure to Tennessee Williams in their influence and lack of recognition in their own lifetimes.

"Union Sundown" is sadly a bit incoherent, aside from the chorus, but the emphatic nature of the rendition makes up for its lyrical confusion. "Clean Cut Kid" and "Band Of The Hand" are quite spirited too, and in the same vein as Dylan's other 'rant' songs from the '80s like "Foot Of Pride" and "The Groom's Still Waiting At The Altar." Perhaps unfortunately, this is a style he wouldn't generally return to after this decade (excepting perhaps "TV Talkin' Song" from 1990).

"When The Night Comes Falling From The Sky" is more suggestive of the direction Dylan would be headed with the early Never-Ending Tour in 1989, with its dark sound and darker themes. It is a bit more atmospheric than the interesting version played in 1987, but no less rocking. "In The Garden," too, is a bit atmospheric, and represents my favorite arrangement of this intense gospel song. Along with "I & I," this song is heavily dependent on the background vocals.

I believe that Dylan's vocal relationship with his backup singers came to its peak in 1986. Though he had a trio singing behind him since 1978, he seems to have improved in complementing them as the years went by. In this year of touring, particularly, he weaves around their well-structured harmonizing in a very intriguing fashion. Listen to how he simply leaves aside vocalizing certain lines in "I & I" and "In The Garden," favoring instead the emphasizing of a final word or phrase. It's pretty interesting stuff, no doubt. One technical note - I have spliced out the lengthy repetition of the chorus phrase at the conclusion of “I & I.” According to Olof Bjorner’s website, a few days earlier “sees my face and lives” was repeated 56 times! You can’t hear the splice, but in case someone would prefer a purer version, and un-shortened version is included as bonus material alongside the art and notes.

Though the 1980s material is emphasized, Bob Dylan's 1960s songs are present here as well. "All Along The Watchtower" is featured in a fairly unique slow arrangement that sounds a bit similar to "When The Night Comes Falling From The Sky." "I Dreamed I Saw Saint Augustine" is an absolutely beautiful rendition, as is the acoustic "One Too Many Mornings." Paul Williams described the singer as having seemingly dedicated himself fully to performances of "One Too Many Mornings" on this summer tour, and it's hard to argue with that assessment. Interestingly, this would essentially mark the end of Bob Dylan's solo acoustic performances, since from 1988 his acoustic sets featured, at minimum, one additional guitarist. Finally, "Just Like Tom Thumb's Blues" is a notable one-off from the 1986 tour. If you listen closely, you can actually hear Dylan calling out the chords during the song's opening. Unsurprisingly, it comes off a bit under-rehearsed, but is a beguiling performance nonetheless. It's one of my favorite songs, so I was glad to hear that it was played at least once with the Heartbreakers.

A few more covers round out the set. "I Forgot More Than You'll Ever Know," which was recorded for and published on Self Portrait in 1970, appeared with regularity on this tour. It works largely due to Tom Petty's subtle harmony on the title line. "House Of The Rising Sun" is also presented here in a rare outing. It would go on to be played less successfully in 1987, but here it is simply sublime. Though it is not present on this edit, after playing the song Bob Dylan explained to the extremely receptive New York City crowd that the band was into overtime and could not keep playing! They certainly earned a break, having played a full 23 songs that night.

Please note that a handful of absolutely wonderful songs are not present on this set, but are available elsewhere in the Thousand Highways Collection. In particular, "Lucky Old Sun" is on the One More Night compilation, and "Emotionally Yours," "Across The Borderline," "We Had It All," and "Lonesome Town" can be found on Ashes & Dust: 1985 - 1986.

I hope you enjoy the set. Having not enjoyed the 1986 shows for a long time, I was converted by the Wasteland Of Your Mind compilation, created by Expecting Rain member Nellie. While a fair number of recordings from this year suffer from being performed in the early days of digital recording and feature a rather harsh, metallic sound, it is possible to find some rather outstanding tapes; I like to think that A Voice Without Restraint presents the best of this material.

Next month, we will jump forward to a rather extensive compilation concerning Bob Dylan's ambitious 1989 tours. There is some very cool, very intense music there, so don't forget to check back in on August 1! Until then, keep yourself healthy and listen to some good tunes.