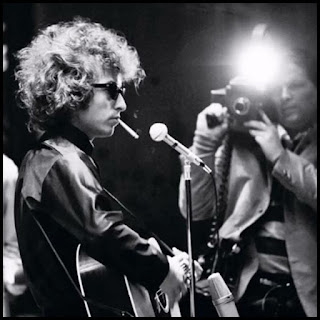 While I have completed my coverage of Bob Dylan's unreleased catalog, as it existed in 2016, I thought it might be nice to continue my DIY Playlist series. This seeks to compile the best of Bob Dylan's released work into compelling playlists, separating the wheat from the chaff. When I'm done, I'd like to think that a collection combining my Thousand Highways compilations and my DIY Playlists would represent an ideal cross-section of the artist's work.

That year represented Bob Dylan's largest tour up to that point, geographically speaking. He traveled from the United States to Australia, by way of Hawaii, then on to Scandinavia and the rest of Europe. Happily, his entourage and record company taped a fair number of the concerts for posterity. Leaked versions of these tapes formed the backbone of the earliest rock bootlegs, and led to a 1996 release of the tour's most famous performance at Manchester, England as The Bootleg Series Volume 4: The "Royal Albert Hall Concert."

The 1966 World Tour also represented some of the singer's most ambitious work, artistically speaking. There are dozens of books that could tell you more, but in short, Bob Dylan had evolved rapidly from a singer known for his protest anthems to a poet known for his introspective acoustic songs and then on into a rock musician; this occurred over a span of only three years, leaving many fans either unable or unwilling to keep up. Consequently, while the increasingly experimental acoustic portions of his 1966 shows were met with a reasonably positive reception, the electric portions had coalesced into a truly aggressive, powerful sound and were received accordingly. This dynamic developed further throughout the tour, to the point that Dylan was actively harassing his rowdier audiences by the end of May. The art did not suffer, though, and both his acoustic and electric performances from the year remain some of the most compelling artistic expression that 20th Century popular music would produce.

Bearing that context in mind, I would like to offer my favorite tracks from the recently released complete 1966 Live Recordings. This massive set contains 36 discs of music, and a fair amount of it, while artistically ambitious, presents some sonic issues. The acoustics were not ideal, as rock music in large spaces remained in its infancy, and adding the layer of recording these shows provides a second source of problems. Consequently, only a handful of the concerts present pleasant listening experiences, and fewer still offer a true complete rendering of the night's proceedings - "Desolation Row" and "Visions of Johanna" are frequently incomplete, and "One Too Many Mornings" is often missing its opening moments. I have combed through the collection for the best-sounding, most complete, and most passionate song renditions, and I would like to offer them to you here:

As you can see, a few concerts stand out: Belfast, Bristol, and Cardiff. A handful of others exist around the margins: Newcastle, Edinburgh and Sheffield. I had disqualified Manchester and the first night of London, simply because those have received their own unique releases and you can listen to them in their entirety.

With regard to Belfast, this is the earliest night on the tour that shows up on my compilation. It is one of Dylan's most receptive audiences of the tour, and I think that informs his more nuanced, less shouted performances. "She Belongs To Me" does not stand out at any of the concerts, but it is particularly lilting here. "Fourth Time Around," on the other hand, is excellent on most nights, but this one offers some peculiar timing and an emphasis on the song's consonants. "Desolation Row" is more relaxed than usual, with a pleasantly reserved delivery. This version of "I Don't Believe You" received an earlier release on Biograph, and it's easy to understand why - on most nights, the harmonica is too harsh or the vocals are unfocused, but it came together perfectly in Belfast. As for "Like A Rolling Stone," this may be the best version of the song I've heard, aside perhaps from the shattered performance by the singer fifteen years later in Avignon; unlike some nights, he doesn't just hurl this one at the audience, but instead teases it out and plays with the vocal rhythm in a unique way.

Bristol is probably my favorite single night of the tour for the electric set. Much of that is actually down to the recording, as it manages to be raw without being distorted and emphasizes both the guitar and drums better than other nights. The heavier, guitar-oriented songs receive their definitive readings here, including "Tell Me Momma," "Just Like Tom Thumb's Blues," and "Leopard-Skin Pill-Box Hat." In particular, the second of those is one of my favorite performances of the song in its fifty year history and easily the highlight of the eight electric tracks here. "Leopard-Skin Pill-Box Hat" sounds almost like it could have been cut at Otis Redding's Whiskey-A-Go-Go live record, it's so electric.

Cardiff was one of the more surprising entries on my list, as the initial pass hadn't left me with any special affection toward the show; indeed, Leicester and Liverpool seemed better alternatives. When picking the final tracks, though, Cardiff presented a more attractive set of songs that blended well with other nights. The recording had a richer low-end, with the bass more emphasized and the vocals less distorted. Luckily, it also features one of the only versions of "One Too Many Mornings" in which the opening is not missing from the recording. Others have asserted that the Dublin performance of "One Too Many Mornings," with its prominent organ fills, is the best one from the tour, but I believe Cardiff narrowly outdoes it. As for "Ballad Of A Thin Man," something about the recording or acoustic conditions manages to make this song a bit harsh at every stop on the tour - Cardiff was the least objectionable, and so it appears here; my guess is that the unique performing conditions, with Dylan moving to a piano, prevented the established soundboard settings from adequately presenting the song.

Newcastle's tape is a bit harsh, but the rendition of "It's All Over Now, Baby Blue" is significantly more intimate than other nights, with most of the forcefulness gone from Dylan's delivery. While Edinburgh's electric portion is largely distorted beyond pleasant listening, the acoustic portion is lovely - "Visions Of Johanna" benefits from some atmospheric foot-tapping defining its complex rhythm and "Just Like A Woman" is impossibly wistful and delicate, resolving in an uncharacteristically bitter final verse; it cuts to the raw heart of the song in a way few later performances could. Finally, Sheffield represents one of the stranger aspects of the set - for years, the bootlegged version of this concert was the best available capture of the tour's acoustic songs. Here, though, the tape ends up a bit distorted. "Mr. Tambourine Man," though, is among the greatest versions ever performed by the singer, and so it could not be excepted from my compilation; that harmonica solo at the end manages, somehow, to utterly transcend time itself.

As for a handful of things that didn't quite make the cut, the best are "Visions Of Johanna" from Leicester, where it includes very warm, pleasant vocals, "Desolation Row" from Bristol, where it is played faster than usual, "Just Like A Woman" from Birmingham, where it resembles one of the year's magical Hotel Tapes, "I Don't Believe You" from Dublin, where it features a unique slow arrangement, "Leopard-Skin Pill-Box Hat" from Leicester, where the audience chatter at the beginning informs a very aggressive version of the song, "Ballad Of A Thin Man" from Copenhagen, where it is presented as a slick jazz track, and "Positively 4th Street" from Sydney, one of the only deviations from the year's standard setlist captured on a soundboard recording. In general, the Paris concert is rather intriguing as well, as much for the particularly aggressive audience and band response as anything else - sadly, its distortion renders it a less engaging experience than it might have been.

I hope you enjoy this collection - it took a long time to compile, but I think it was worth it in the end. 36 CDs is a lot of music, and having a guide to it is a nice way to experience the breadth of Bob Dylan's artistic achievement in 1966. When you combine this playlist with the two complete shows from Manchester and London, I think you end up with a great cross-section of the year's performances.

Let me know what you think in the comments below, and feel free to offer your alternative suggestions. I'm sure listeners would like to hear opinions on how different nights' performances stack up, especially given how static the setlist remained.