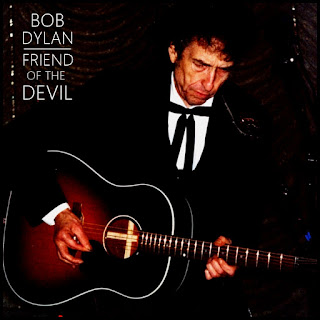 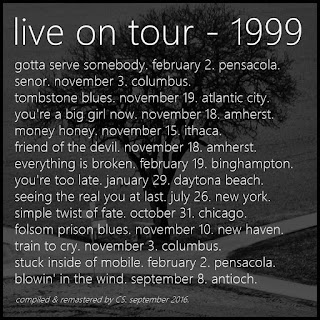 Friend Of The Devil
Live Recordings: 1999

Welcome to the second (and final) episode in The Thousand Highways Collection's coverage of Bob Dylan's concert performances from 1999.

A couple years back, The Endless Highway covered both the acoustic and electric portions of this year; Friend of the Devil is intended to follow up on that well-received compilation. More than a few people had requested more attention be given to 1999, which was reasonable given the variety of Bob Dylan's setlists and high level of commitment to the material.

Unfortunately, while there were numerous instances of rare song choices, many of the best renditions represent more frequently played songs. I hope you will not begrudge this collection's focus on performance quality rather than rarity of title.

With that said, a few songs here are particularly noteworthy. "Money Honey" was recorded for an Elvis Presley tribute album in 1994, but was only ever played live once; a lovely recording of that performance is found here. "You're Too Late" has only been played a handful of times - most recently at an unreleased (but partially broadcast) private concert in 2014 - and the finest circulating performance so far is from Bob Dylan's Winter 1999 Tour. "Seeing The Real You At Last," while more common earlier in the 1990s, had largely departed the setlist by this year; you will hear one of Dylan's most committed, snarling vocal performances of the song on Friend of the Devil. Finally, though "Blowin' In The Wind" is not infrequently played, this beautiful rendition features American multi-instrumentalist Marty Stuart on the mandolin.

Besides those rare tracks, the reminder of the songs are not uncommon in Bob Dylan's touring repertoire. "Gotta Serve Somebody" is uncharacteristically pointed, its ad-libbed lyrics tighter than usual. "Senor" features a truly lovely violin, and later a duet between violin and harmonica reminiscent of how the song might have sounded if it had been recorded and played during the Rolling Thunder Revue. "You're A Big Girl Now" has one of the more intriguing soundscapes of the set, as the rhythm section creates a mellow, introspective vibe and Dylan's melancholy lead guitar (not generally one of my favorite features in his songs) drives the performance home.

"Friend Of The Devil" is another excellent piece for the backing band, as Tony Garnier's bass and Larry Campbell's mandolin provide the listener with seven minutes of bluegrass joy. "Everything Is Broken," a song that was too often tossed off with little attention paid to vocal precision, is here infused with all the sarcastic sneering that the song deserves; many of the highlights are new lyrics, including the incisive "every time you leave and go off somewhere / my heart is broken, babe, but what do you care." "Folsom Prison Blues" is not as word-perfect as some earlier performances, though that does not impede the strength of this iteration. "Stuck Inside Of Mobile With The Memphis Blues Again" is a glorious, blazing celebration prior to closing the set with an introspective bluegrass-flecked performance of "Blowin' In The Wind," reminiscent of its airings in 1980.

It is worth briefly remarking on the absence of an acoustic set here, given how prominently that featured in concerts from 1999. Honestly, the acoustic set primarily contained songs that have been well-covered on my earlier compilations from 1998 to 2001. The arrangements were not distinct from the immediately adjacent years, so it seemed unnecessary to emphasize them here.

The recording quality was extremely high during 1999, as it had been over the preceding few years. We are lucky to have such extraordinary documentation of such a fertile period in Bob Dylan's performing career. I hope you enjoy the album, and that it serves as a worthy successor to The Endless Highway.