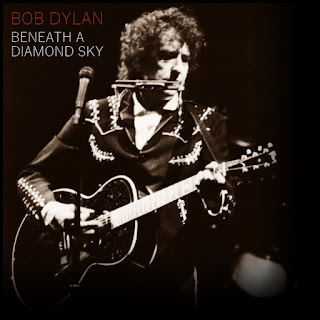 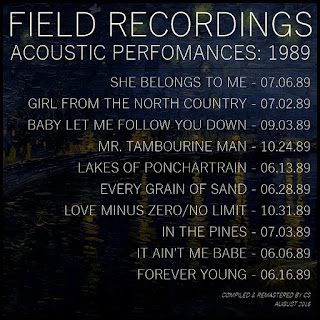 Beneath A Diamond Sky
Acoustic 1989

This collection is not quite the revelatory set that the two other Thousand Highways Collection 1989 compilations are, but it is interesting nonetheless.

The songs consist entirely of acoustic performances from 1989. This is right in the heart of one of Dylan's most fertile periods for performing acoustic songs, alongside 1961-1966, 1975, 1995, and 1999-2002. The songs aren't as strong as those played the preceding year, but offer more intriguing renditions of the singer's own catalog; while 1988's acoustic sets were strongest when representing traditional songs, 1989's are at their best in the presentation of original material.

The summer tours make up the bulk of this set, due largely to Dylan's more limited vocal range in the Fall, and clearer tapes. The electric songs from the Fall Tour are loud enough to make it across the hiss of tape, but the acoustic songs fared less well. Even so, missing "Mr. Tambourine Man" from the Fall Tour would be a shame, so a performance from Boston graces this collection.

Notable inclusions are a very rare outing for "Baby Let Me Follow You Down," the only live acoustic performance of "Every Grain of Sand," one of only three live performances of "In The Pines," and a very beautiful "Forever Young." Note that "Every Grain of Sand" had appeared on another Thousand Highways compilation, but I thought it too good not to include here. It is, perhaps, the defining acoustic performance of the year.

"In The Pines" is intriguing, as it is said to be based on a version of the old song made popular by Bill Monroe, rather than the more familiar variant popularized by Leadbelly. I've not heard the Bill Monroe version, so I can't comment on whether this is true or not.

"It Ain't Me Babe" is the performance mentioned in Andrew Muir's One More Night, in which the singer messes around with the audience's capacity to sing along. "Lakes of Pontchartrain" is, as ever, utterly beautiful, and should be in everyone's collection. This is the performance that originally brought the song to my attention some years ago. I wish Dylan had recorded a studio cut of this at some point, but there is no evidence to suggest that he did.

The guitar work is pretty great throughout, owing to the combined efforts of the singer and the guitarist G. E. Smith, who played lead guitar in the year's electric sets. It really comes across in "Girl From The North Country," "Lakes of Pontchartrain," and "It Ain't Me Babe," but is quite pleasant throughout. Smith is one of the best accompanists that has played with Bob Dylan so far, and his talents are well-represented here.

As always, I hope you enjoy this pleasant collection. Next month will bring the Fall 1991 tour to this website. It's not one of Bob Dylan's more popular touring years, but I think a listen to this compilation might just push you into the fan camp. It's sure to be an interesting listen!

Until then, keep yourself healthy and listen to some good tunes. 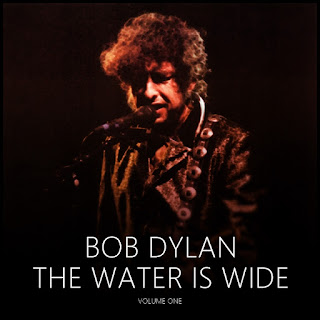 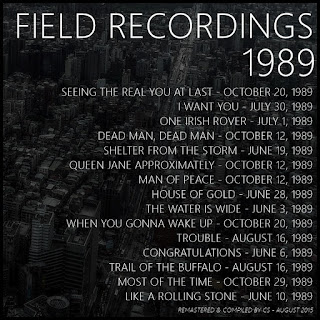 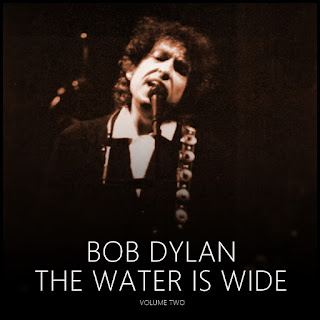 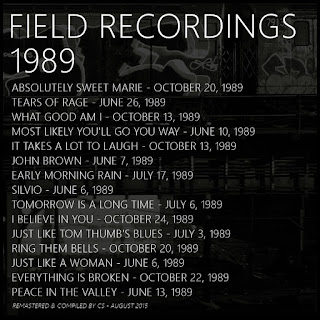 Welcome to the hotly anticipated 1989 installment of the Thousand Highways Collection! Settle in, because this set is a whopping two discs long.

1989 is a very weird, intense year for Bob Dylan concerts when juxtaposed with its immediate predecessor, 1988. Not only was the scope of the tour broadened to include many more countries (1988 only hit the United States) - the musical palette was expanded considerably. This was coupled with a significant increase in the gruffness of Dylan's vocals to create a tour that looked a lot like the one before but with very little musical similarity. While 1988 represented a performer playing his music with the most energy he could muster, 1989 presents a much more edgy, experimental side of the singer and band.

Due to the large number of songs on this set (30 in total!), I will not be conducting a track-by-track review. Instead, let's focus on some of the broader trends at work.

One of the primary sounds in the palette, and my favorite aspect of the year, was an emphasis on darker, minor key songs. This was more evident in the Fall Tour, as songs from Oh Mercy made their tour debut, but was present too in the summer. "What Good Am I?", "Most Of The Time," "Tears Of Rage," and "One Irish Rover" represent the more melancholy presentation of this sound. There is a bitterness that is particularly well-served by the growly delivery associated with these ballads.

The more uptempo manifestation of this sound is perhaps even more interesting. "John Brown," "Trail Of The Buffalo," "When You Gonna Wake Up," and "Dead Man, Dead Man" are all interestingly off-kilter performances. The words are not all there, but the vibe is expertly achieved. Check out that strange klezmer-esque instrumental in "Trail Of The Buffalo" or the pulsing bass of "John Brown." Even the feedback near the end of "Dead Man, Dead Man" serves to produce this environment of dark heat.

Dylan's 1960s material is given rather impressionistic treatment here as well. "Tears Of Rage" was spectacularly debuted in Greece, and "Just Like Tom Thumb's Blues" is as inventively arranged as Paul Williams suggests in his Performing Artist series. The author Clinton Heylin singles out this performance of "Queen Jane Approximately," played at the Beacon Theater in New York, as especially praiseworthy, and it's impossible to disagree. Evident on that song, as well as a handful of others (including a blisteringly paced "I Want You"), is the second interesting trend of the year - bizarre, rambling song endings. This sounds like a negative, and indeed sometimes it was, by the effect could be entirely mesmerizing. The end of "Queen Jane Approximately," for example, plays out like a completely different beautiful song.

This presents a challenge for the compiler, since songs had a tendency to evolve directly into the next track. I avoided this by splicing in some audience applause and using careful fades. Hopefully you won't find this intrusive!

The third trend in Dylan's sound on these tours was an increased reliance on inventive cover performances. This presents a continuity with the 1986 tour, but represents a striking break with 1987 and 1988. While the acoustic set had included covers in 1988, the electric set consisted primarily of Dylan originals. As suggested by the circulating rehearsals for 1989's touring, though, there was a distinct emphasis on performing a wide, wide ranger of covers in this year.

Other intriguing bits include an uptempo country arrangement of "Tomorrow Is A Long Time," apocalyptic electric blues as represented by "Man Of Peace" and "Everything Is Broken," one of the only two airings of the Traveling Wilburys' "Congratulations," and one of the most rollicking performances of "Like A Rolling Stone" this side of 1981.

These trends would continue into 1990, and is represented by the winter London / Paris residency on the Thousand Highways Collection with a CD called Town Without Pity. I'm not sure any of the following years accomplished quite the scope of 1989, however.

The one thing you are missing on this release is representation of the singer's acoustic sets. I will be rectifying that with an all-acoustic bonus disc later this month, so keep your eyes on the blog. The sound quality of 1989's tapes is wildly inconsistent, and favored the electric tracks, so in general the acoustic songs do not have the same impact as those in the preceding year. Still, there are some truly remarkable performances, and I'd hate for them to pass you by.

Update - August 3, 2015: Volume One was several seconds too long for a single disc, so all relevant links were re-uploaded tonight with altered versions of "Congratulations" and "Most Of The Time." Let me know if the problem persists.
Posted by CWS at 12:01 AM 19 comments: