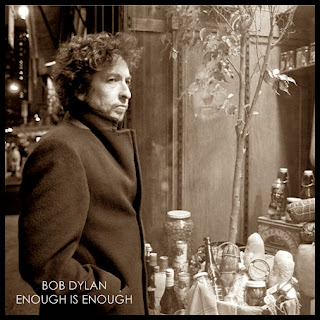 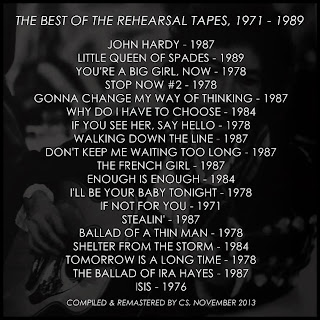 This compilation has taken some time to assemble, as I reviewed the available rehearsal tapes from 1971 to 1989. As far as I know, none exist prior to or after this point, excluding sound checks.  The one exception, 1994's MTV Unplugged rehearsals, will be the subject of a later release.

The tracks were judged by sound quality and performance, which prevented the inclusion of many 1976 tracks for the former reason and 1987/89 tracks for the latter. Still, a couple of performances from those sessions are included here. 1976's "Isis," in particular, is a fascinating look at a direction the song never took in concert. There's a looseness about many of the songs on this collection that invites the listener to sing along, and enjoy a peek behind the scenes.

None of this will be new to the collector, but to the novice some of these songs may not have been heard before. Dylan's 1987 takes on many of the songs of his youth are enjoyable, if slight, and are more pleasant to my ears than the tour which followed. Similarly, Dylan's voice on the 1978 rehearsals sounds strikingly similar to his Rolling Thunder vocals; this would swiftly pass away once the long tour began.

I hope you find something new or interesting in these tracks - rehearsals are not meant to be heard by anyone other than those present, and lack the polish or energy that make a studio or live recording compelling. Still, there can be art found even in these hidden moments. Set this one up to play, and see what you find.

If you enjoy these tracks, I encourage you to check out the official recordings of the tours or live performances to which they relate:

Next week, you will receive this blog's first taste of the "Never-Ending Tour," with a live collection focusing on Bob Dylan's 1988 tour. Until then, keep yourself healthy and listen to some good tunes.

Determined To Stand: Live in Europe, 1987 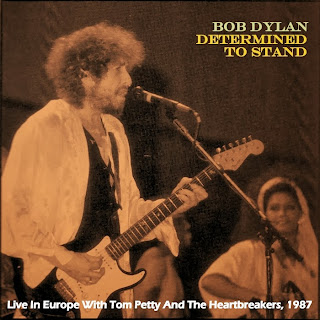 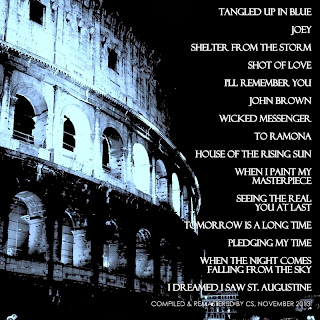 Well, most folks don't like Mondays, but I hope you'll be happy once you give this a listen. Right here, hidden amongst these ones and zeroes, is one of the best-kept secrets of Bob Dylan's performing career. The Fall Tour of Europe, 1987, was one for the ages.

Now, be aware - there was a lot that did not work on this tour. While the backing band, Tom Petty & The Heartbreakers, provided reasonably consistent accompaniment, Dylan's vocals were not always up to the task. What was constant, though, was a sense of experimentation. From night to night, arrangements could vary radically. It took until the third night of the tour for a song to appear a second time!

And that experimentation, that push and pull between singer and band, and within the singer himself, is undoubtedly what generated the exquisite recordings found here. Just listen to the airy nature of "Tangled Up In Blue" and "Shelter From The Storm," the majesty of "I Dreamed I Saw Saint Augustine," the honesty of "To Ramona," the intimacy of "Tomorrow Is A Long Time," the anger of "John Brown," or the mystery in "When The Night Comes Falling From The Sky." Whatever strange quality imbues these performances, you can't find it anywhere else.

Part of the strength of these recordings, as noted above, is the interplay between Dylan and the band, especially keyboardist Benmont Tench. His piano-playing is the centerpiece of many songs, particularly "Shelter From The Storm," "John Brown," and "Tomorrow Is A Long Time." So too is the passion evident in the singing. "Joey" really presents what Dylan has called a Homeric quality in this definitive reading, and "Tomorrow is A Long Time," always a fine song, is truly confessional here. In some ways, it is a shame that these performers would never share a stage again after the Fall of 1987; one wonders if lightning could strike twice.

The title is taken from Bob Dylan's own words to describe the challenges he was facing during this period, and how he overcame them. Many of the concerts from this tour reflect a struggle to connect to the music, but every so often, the results of this struggle created something truly special. The inspiration from this revelation would lead to the Never-Ending Tour, which began the following year.

At times delicate, like "Shelter from the Storm," and at times absolutely outrageous, like Shot of Love, the passion for music comes through in every note. If you haven't listened to any shows from this tour, give this CD a chance. And if you have listened before, and not been impressed, give another listen. You never know when this will be just what you needed to hear.

If you enjoy these recordings, you may enjoy the studio incarnations of these tracks, found on the following releases:

Before stepping into the Never-Ending Tour era, next week's release will feature the best of the circulating rehearsal sessions from 1971 to 1989. Until then, keep yourself healthy and listen to some good tunes.
-CS
Posted by CWS at 6:51 AM 6 comments: 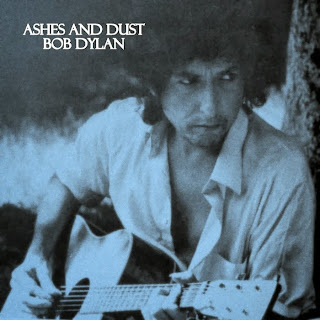 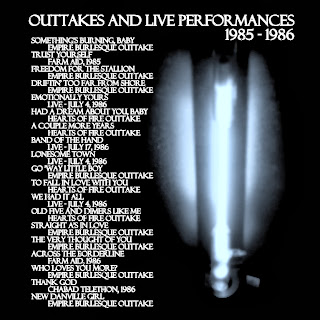 Hope all has been well for you since last week. This week I am presenting one of the more peculiar compilations in my collection. 1985 - 1986 is not generally regarded as an especially strong period of time for Bob Dylan's music, and that is not a misguided impression. The records released were very much of their time, and thought he songwriting and performances remained strong, production sometimes obscured the quality.

What I would like these selected songs to do is to rehabilitate, to a small degree, this era. Clearly, a song like "Trust Yourself" comes across much stronger here, in a live context, than it did as originally released. Similarly, this live rendition of "Emotionally Yours" is incredible, though of course that song was one of the highlights of Empire Burlesque. "Band Of The Hand," which exists in a studio-recorded cut on the soundtrack to a film of the same name, is performed here with Tom Petty & The Heartbreakers as the backing band. The collaboration between Bob Dylan and Tom Petty from 1985 - 1987 was very fruitful, and will be explored further in next week's release.

The outtakes are just as interesting as the live cuts. "Go 'Way Little Boy" sounds like an updated "Absolutely Sweet Marie," and was originally given to another singer for her record. You might recognize "A Couple More Years" from my earlier post, Still The Same Man, Volume One, but this version is completely different - this Shel Silverstein-penned ballad was recorded acoustically at the sessions for the film Hearts of Fire in 1986, but was not released on that film's soundtrack. "To Fall In Love With You," recorded at the same sessions, is one of the more haunting and mysterious songs in this catalog. A number of these songs would later be rerecorded at sessions for Knocked Out Loaded, including "Driftin' Too Far From Shore" and "New Danville Girl," which was eventually rewritten as the esteemed "Brownsville Girl."

If you enjoy these songs, I encourage you to check out the contemporary official releases:

Though the production is challenging at times, you would be well-served by including the unparalleled "Dark Eyes" from Empire Burlesque in your record collection. Also, The Bootleg Series Volume Three includes a fantastic outtake of "When The Night Comes Falling From The Sky," also from Empire Burlesque. Unfortunately, the film soundtrack for Hearts of Fire is currently out of publication, but you never know when that may change; if you can find that soundtrack, "The Usual" is a pretty great recording not available elsewhere.

Next week we will be dipping back into live performances, documenting the positively fascinating jazzy recordings of Bob Dylan and Tom Petty's 1987 Tour of Europe. Don't miss it. Until then, keep yourself healthy and listen to some good tunes.

March 19, 2015 Update: It has come to my attention while compiling the alphabetical song index that some performances from this compilation date from 1984. I have corrected the title here on the blog, but the artwork dates remain slightly inaccurate. If I have the chance, I will create new artwork. Otherwise, please forgive this error.
September 17, 2021 Update: The link has been removed due to content being officially released in The Bootleg Series Volume 16.
Posted by CWS at 5:32 PM 4 comments: 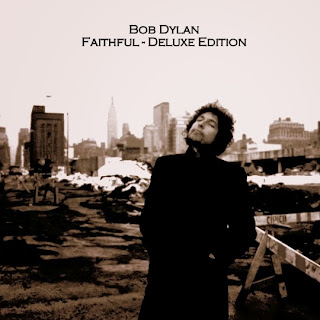 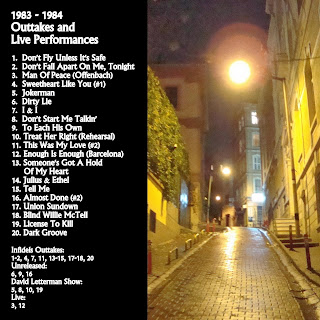 Thank you for sticking with the blog during my October hiatus. There will be plenty more great unreleased recordings being posted here in the months ahead, beginning with this week's exploration of Bob Dylan's unreleased Infidels-era recordings.

The songs here fall primarily into four categories: outtakes from Infidels, live performances from the 1984 Tour of Europe, rehearsals for that tour, and songs from Dylan's appearance with The Plugz on David Letterman's television program.

The outtakes are among the most treasured unreleased songs that you'll hear on this website. This is largely because they are generally considered to equal or surpass the final release of the record. In some cases, the difference between this and the final release is the mix. Mark Knopfler had apparently created an entirely unique mix of the record before it was fully remixed prior to release; "I & I" is one such song. Most of the outtakes here, however, are very different from the tracks released on the album, or have not been released in any form; "Julius and Ethel" and "This Was My Love" are two that remain fully in the vaults. Even the songs that were eventually released on The Bootleg Series, Volumes 1-3, "Someone's Got A Hold Of My Heart," "Tell Me," and the legendary "Blind Willie McTell," are radically different on this compilation.

The live songs and rehearsals are the slimmest selections found on Faithful. Though "Tangled Up In Blue" received an extensive rewrite for the year, you can find it and many other reworkings of old classics on the official release Real Live, a link to which is found below. Instead, I have presented only contemporary songs. "Man Of Peace" benefits tremendously from the energy of a live airing, and "Enough Is Enough" was never recorded in a studio. "Dirty Lie" and "Almost Done" are two songs which could have become extraordinary additions to Dylan's catalog, but are not known to have been played again after these sessions; they remain deeply compelling sketches.

The true gems of this release, in my opinion, are the tracks from the David Letterman Show. This is one of the most passionate, fierce performances that Bob Dylan delivered in the '80s, or at any other time. Each of the tracks has something to say, from the aggressive cover of "Don't Start Me Talkin'," to the wildly impressionist debut of "Jokerman," to the sincere indictment of man's pride in "License To Kill." We are lucky to have this moment preserved in such a high quality recording.

If you enjoy these recordings, please purchase the following official releases from Columbia Records (The Bootleg Series is a particular treat, containing two of the finest outtakes from the Infidels sessions, "Foot of Pride" and an acoustic "Blind Willie McTell"):

I would like to thank you for your patience during the month of October. Devoting the extra time to my wedding was a smart move, and I enjoyed both the wedding and honeymoon tremendously; clearly I married the right person, as they encourage this rather time-consuming hobby!

Next week, we will move on to the next stage in Dylan's 1980s development, with the best outtakes and live tracks surrounding the release of Empire Burlesque. Until then, keep yourself healthy and listen to some good tunes.

-CS
Update - September 17, 2021: The link has been removed due to content being officially released in The Bootleg Series Volume 16.
Posted by CWS at 6:04 AM 24 comments: