Once Upon A Time: Unreleased Live Recordings, 2017 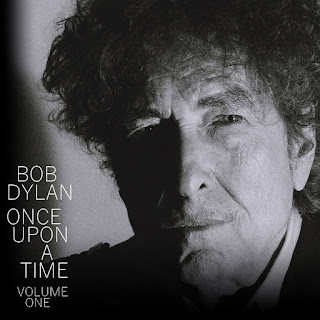 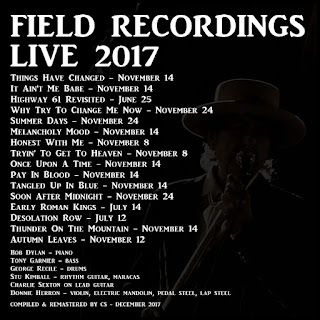 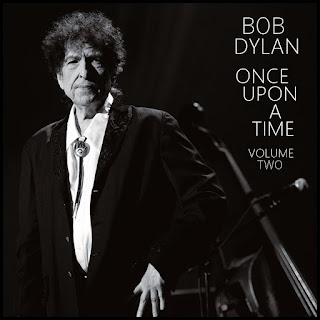 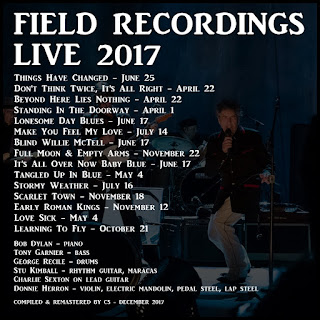 2017 was a good year for Bob Dylan's live performances. He managed to play intimate club shows and fun festival sets throughout the year in North America and Europe, developing his setlist significantly from the more static days of the last few years. There were some negative consequences, as the performances are perhaps not quite so tight as they were in 2014 or 2015, but the change overall was one that made a more exciting experience for fans in person and following along at home.

Happily, the tapers also came through in much more challenging conditions than have been faced in recent memory. Terrorism at concert venues has become a sadly common headline, and security has been tightened accordingly; smuggling in recording gear is harder than it used to be, of course. A number of dedicated individuals persevered, though, and we've been graced with extraordinary recordings from Spot, Soomlos, JF, Big Daddy Buffalo, EBR, beer and Imperfect Gravy, among others.*

I have compiled the most consistently strong tracks onto Volume One. This tracklist is less exciting than Volume Two, perhaps, but is the more compelling listening experience. Alex Leary's Washington, DC tape is my favorite combination of performance and recording quality, and is well-represented here. Listeners will notice that the bulk of content on this first volume comes from the Fall Tour of North America - this is because Bob Dylan played and sang in a more adventurous fashion on the final tour of the year, altering a number of arrangements quite significantly.

In particular, the arrangements for "Things Have Changed," "Summer Days," "Honest With Me," Tryin' To Get To Heaven," "Tangled Up In Blue," and "Thunder On The Mountain" have been dramatically altered. The changes to "Things Have Changed" and "Summer Days" occurred earlier in the year, but the others were largely altered by the Autumn concerts. "Honest With Me" and "Thunder On The Mountain" were the most significant of the alterations, as both unexpectedly became infused with a kind of surf rock aesthetic; "Summer Days" was only marginally less altered, becoming a violin-oriented up-tempo folk song more akin to "You Ain't Goin' Nowhere" than its former swing sound.

One major change to Bob Dylan's own on-stage work in 2017 was his move to piano for virtually all non-cover performances. While he had been singing many songs center-stage without accompanying himself instrumentally for much of 2013 to 2016, he had moved back to playing piano on "Things Have Changed," "Pay In Blood," "Love Sick," and others. The cover songs were still performed almost exclusively without piano accompaniment.

With regard to Volume Two, the recordings vary much more in quality and ambiance. Crystal Cat turned in a few of the year's more interesting tapes, but their work on delivering clarity came at the consequence of a warmer room sound. Interesting rare performances like "Standing in The Doorway" and "It's All Over Now Baby Blue" are unfortunately a bit thin. The performances are still excellent, though, and I can't imagine its anything that couldn't be overlooked by dedicated fans.

Three of the songs on Volume Two also appear on Volume One, but this is no error or the result of a lack of song diversity. In fact, the three songs are curiosities that should not be missed. "Things Have Changed" is played with a much more intense, dark country flair here. "Tangled Up In Blue" is an intriguing arrangement that exists halfway between the way it had been played from 2013 to 2016 and the new, more easygoing treatment it would receive at 2017's Fall shows. "Early Roman Kings," finally, is representative of the way that the song was played throughout the Autumn Tour - softer in tone than the pounding electric blues of early 2017 but with brief, jazzy instrumental interludes between verses; it also features some new lyrics.

Some other interesting rearrangements are present on Volume Two as well. "Love Sick" is performed in a soft, moody style that recalls its sound on 1997's Time Out of Mind. "Scarlet Town," one of my favorite songs from 2012's Tempest, has been rearranged to a slightly more dramatic, mid-tempo ballad; it happily retains its minor-key menace. "It's All Over Now Baby Blue" is perhaps not a major alteration, but it does sound strangely like the composer combined its lyrics with the more rollicking music of "Just Like Tom Thumb's Blues." "Blind Willie McTell" is quite similar to the way it was played at the 2012 Critics Choice Awards, though the piano's prominence lends it a sound even more reminiscent of New Orleans in the early Twentieth Century.

Finally, the second volume ends on a bittersweet note. Bob Dylan's old touring partner and friend, Tom Petty, died on October 2, 2017, and received an on-stage musical tribute at the end of Dylan's show in Broomfield, Colorado. This song had not ever been publicly played by Bob Dylan before, but his delivery and the band's performance is as tight as if they'd been playing it nightly. The only capture of this performance circulating as of December 31, 2017 was a lossy recording from a cell phone. Listeners ought not criticize the sound quality, though, as without the work of this taper we'd not have any document of the night at all; I'm making an exception to my typical lossless-sourced rule to present the moving performance, and I suspect listeners will agree with the decision.

With that, I hope you all enjoyed the year's Bob Dylan performances as much as I did. These are challenging times, and we are lucky to have a musician as talented as this to help us muddle through; similarly, we are eternally blessed that the tapers spend their time and hard-earned money getting these recordings out to the wider world. Until we meet again, keep yourself healthy and listen to some good tunes.

* Note: A comment from one of the tapers reminded me that some of the names were not pseudonyms and could create problems for accessing venues in the future. If you were one of the tapers whose name has been redacted for this purpose, let me know an appropriate pseudonym and I will add it back into the source list.
Posted by CWS at 12:00 AM 35 comments: