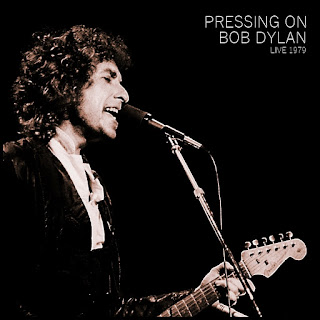 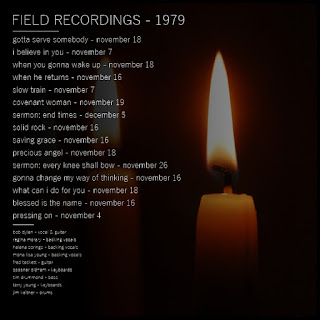 In November 2017, Sony finally published a significant portion of Bob Dylan's unreleased live and studio performances spanning 1979 to 1981 as The Bootleg Series Volume 13: Trouble No More. This period had gone almost entirely untouched by Dylan's record company outside of the contemporary studio albums (Slow Train Coming, Saved, and Shot of Love) and a handful of live tracks recorded at 1981's noteworthy New Orleans concert - "Heart of Mine" on 1985's Biograph and "Dead Man, Dead Man" on 1989's "Everything Is Broken" single.

While the new Bootleg Series addition is a welcome addition to any collection (and perhaps my favorite Bootleg Series entry so far), there is always another side to the story. In the case of 1979, the other side is perhaps less important than usual; Dylan didn't significantly alter arrangements or setlists on his first Gospel Tour, so the average fan would likely be perfectly happy listening to the excellent versions chosen and presented in exquisite sound quality for the official compilation. The more enthusiastic fan of Bob Dylan's gospel period, though, might be interested in hearing alternate versions of songs.

More importantly, the official CD set entirely omitted the between-song commentary offered by the singer at these concerts. 1979 and 1980 were genuine rarities in Dylan's career, as the typically reserved performer opened his heart up to audiences. He spoke at times in clearly rehearsed phrases and at other times spontaneously. He had recently converted to Christianity and felt a sense of responsibility to preach the gospel using the two methods most readily available to him - his albums and his concerts. Given the outsized role of Dylan's preaching at shows and its absence from the official Bootleg Series entry, I emphasized it on Pressing On: Live 1979.

Two songs here have extended introductions, while two more lengthy sermons have been isolated as discrete tracks. Many, myself included, find the omission of between-song prose on Trouble No More to be a bit more conducive to repeat listens, so I wanted listeners to have the same option on this unofficial compilation. The first of the two sermons, which I've arbitrarily titled "End Times," is a lengthier explication of the apocalyptic biblical reading that informs songs like "Slow Train Coming" and "Are You Ready?" The second sermon represents the most confrontational moment in the singer's career since feuding with his audience on-stage in Britain on the 1966 tour; he is heckled relentlessly while telling a story about 'false deceivers' and has the lights turned on in the hall, telling his hecklers to go see a KISS concert and 'rock and roll down to the pit' if they don't care for his message.

With regard to the music, there will be few surprises here for those who own Trouble No More. The arrangements and performances are more or less the same, though the sound quality is appreciably worse on these recordings. That said, a handful of tracks benefit from the reduced instrument separation: "Gotta Serve Somebody" is more full here than on Disc One of Trouble No More, "Covenant Woman" is more compressed so the song's first verse isn't unreasonably quiet, the blown bass of "Slow Train" hammers home the sense of smoke and brimstone, and the organ on "Precious Angel" offers a warmth that can be lacking on crisper recordings of the song's 1979 arrangement.

All of this being said, the most significant musical inclusion on this compilation is "Pressing On." When played on November 4, 1979, the song featured an additional third verse that was rapidly dropped and (seemingly) never even made it to the studio when the song was recorded at Muscle Shoals in 1980. The rare verse doubles down on the second verse's references to an internal battle with Satan, so perhaps it was dropped for de-emphasizing the song's broader, more inspirational message. It's hard to say, but I'm glad that the song was recorded in a reasonably clear manner before the verse disappeared permanently.

The next installment in The Thousand Highways Collection will document Bob Dylan's tours of early 1980, including unreleased tracks from the much-beloved Toronto residency. Until next time, keep yourself healthy and listen to some good tunes.