In The Summertime: Unreleased Live Recordings, 1981 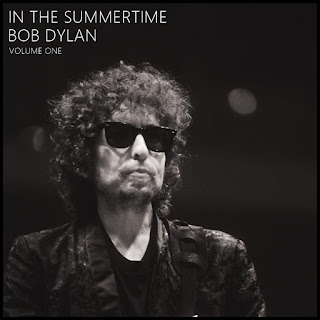 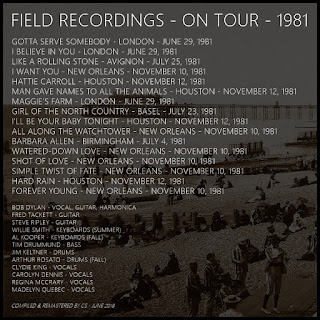 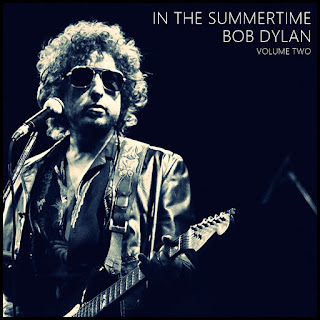 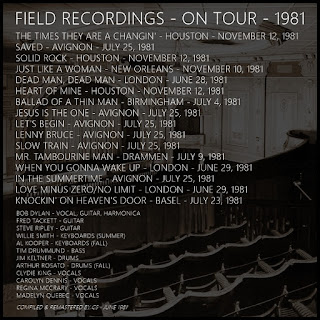 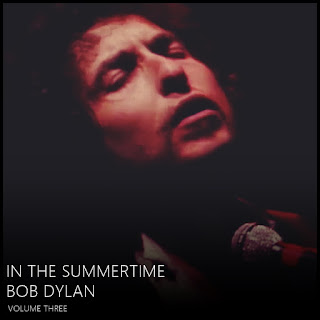 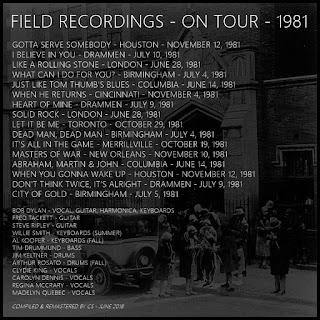 1981 is my favorite year of Bob Dylan's touring career. Consequently, I've put quite a bit of time and attention into this uncharacteristically lengthy entry in the Thousand Highways Collection.

The third and final year in Bob Dylan's so-called 'gospel period' is a peculiar, unique experience. The early days of the tour were actually quite reminiscent of the preceding Musical Retrospective Tour of Fall 1980. Note the appearance on Volume Three of "Abraham, Martin & John," which was played only twice in 1981 after being featured regularly throughout the earlier tour. Other songs shared between Dylan's four appearances in the United States during June 1981 and his popular return to secular performances between November to December 1980 after a year of pure gospel were "Rise Again," "Covenant Woman" and "We Just Disagree." These tracks would disappear from the set after the singer set foot on European soil for a Summer tour, and the new year would quickly acquire its own identity.

Most conspicuously, a Caribbean influence pervaded Dylan's sound. Tracks which had formerly been compellng but staid, like "I Believe In You," somehow grew in power after receiving more idiosyncratic vocals and a more complex drum pattern courtesy of Jim Keltner. The new tracks, which would be published on Shot of Love in August 1981, were a consistent highlight of the concerts and contributed to the Caribbean flair. As he'd done during the Rolling Thunder Revue in 1975, Dylan managed to put across these new songs even more powerfully on the road.

The recent Trouble In Mind, by Clinton Heylin, presents a narrative of the tour running out of steam as it moved from Summer to Fall. I disagree wholeheartedly with this assessment, much as I respect Heylin's research into the unreleased recordings of this time period. The Summer shows are incredible - Avignon is among the best recordings of the singer's career - but Fall includes a more bizarre setlist and increasingly on-the-edge performances. Check out the seemingly Cheap Trick-influenced "I Want You" or the passionate "Lonesome Death of Hattie Carroll" for a look into Dylan's idiosyncratic reinventions of classic songs. A soundboard recording of New Orleans, mixed by studio legend Daniel Lanois, circulates in fan circles, but my favorite show from the Fall Tour is Houston. Introduced by Hugues Aufray, a French artist and fan, Dylan performed a particularly loose concert to the enthusiastic Texas audience. The show circulates in a lossless audience recording, but I have opted here for the comparatively lossy cassette master that sounds absolutely magnificent to my ears.

As his performances grew in unique arrangements - consider the total reinvention of "Mr. Tambourine Man" featured in Drammen on July 9 - Dylan also grew uncharacteristically talkative with his fans. At Columbia on June 14, he offered his amusing if condescending assessment of a writer penning a biography of him. At Avignon on July 25, on the other hand, he lauded fans who had followed the tour from Toulouse. At London on June 26 he offered insight into how quickly "Lenny Bruce" had been written (two minutes), and at Nasvhille on November 14 he reminisced about how dangerous the city was for a man with long hair when he'd recorded Highway 61 Revisited in 1965. In my favorite instance, he mused about the ascent of computers and their role in air traffic at Houston on November 12. All in all, it's a lovely year for the singer's on-stage commentary.

The first two volumes here are intended to represent something of a standard show. As Paul Williams notes in his inimitable Performing Artist series of books, Bob Dylan's 1981 tours were something of an anomaly. Rather than focus on a single element of the singer's career - either a self-conscious career retrospective like 1974 or 1978, or an emphasize on recent albums like 1966 or 1975 - this year would be uncharacteristically free of such constraints. Setlists were clearly used, as many song sequences remained the same throughout the year, but the overall selection of songs would be wider than anything that had come before. 1981 was a year where the singer seems to have felt untethered by expetations: he played songs from his upcoming (or recently released) record, but didn't dwell on it, while looking to the past through a new lens.

The third volume instead focuses on tracks which didn't make the initial selection. Some of these have been included on other Thousand Highways compilations and I wanted to centralize them here. Others, like an unsuccessful yet entirely unique full-band performance of "When He Returns," are new to my collection. "Gotta Serve Somebody" represents the surprising fact that the song went from the exciting rearrangement that appeared on the Summer Tour to a more straightforward, if charmingly rendered, arrangement from the following Fall Tour. "Solid Rock" moved in the opposite direction, as it was performed in a guise reminiscent of 1979-1980 during the Summer but was rearranged as a slow funk crawl in the Fall. Other tracks appear here which sadly lacked better-quality recordings - "It's All In The Game" and "Let It Be Me" chief among these - while "Heart Of Mine" is an intriguing look at what might have been: Dylan played organ on the up-tempo Summer 1981 performances of this Shot Of Love single, but it reverted to a more standard arrangement on the Fall Tour.

I hope you enjoy this selection of songs. I absolutely adore Bob Dylan's 1981 live performances, and I'll admit a touch jealousy for those who had the chance to attend them in person. Still, I'll remain content with this surprisingly extensive set of beautiful recordings. Until next time, keep yourself healthy and listen to some good tunes. 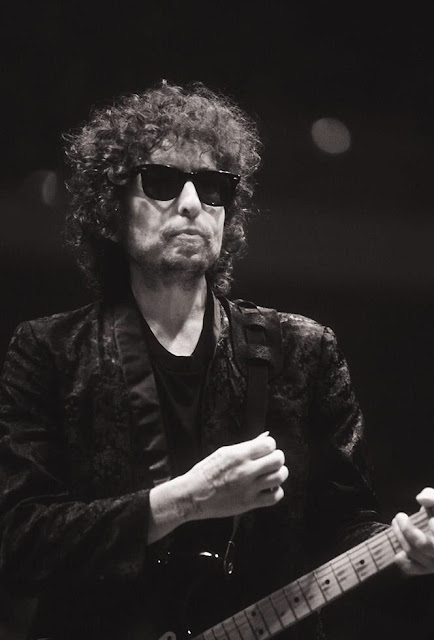 I haven't forgotten you all. The new collection should have posted yesterday, wrapping up our re-exploraiton of the gospel years in light of Sony's 2017 release of Trouble No More: Live 1979 - 1981. Unfortunately, I started a new job in the past month (after ten years at my last one!) and have been more than a little distracted.

This is all the more challenging because 1981 is my favorite year of Bob Dylan's touring career and I really want to do it justice with an expanded set. Consequently, I have an exhaustive three-volume set coming to you soon. I'm still putting the finishing touches on it, but it should be ready by June 15. Check back in on that day and I'm sure you'll find an exciting new chapter of the Thousand Highways Collection. Until then, keep yourself healthy and listen to some good tunes.