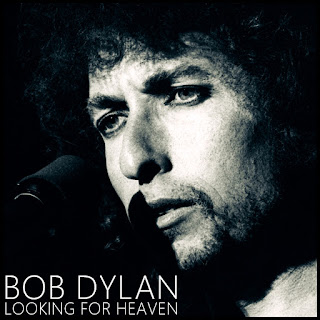 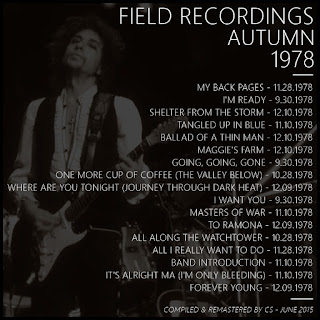 Alright, friends: I got too excited about this tour and just had to publish this as a bonus release.

Welcome to the bizarre road trip that is Bob Dylan’s 1978 Fall Tour. While portions of the tour have appeared on the earlier 1978 Thousand Highways compilation, The Road Is Long, it struck me that the tour is notable enough to have a full disc dedicated to it. The earlier compilation focused on songs that were unrepresented on the official At Budokan album; for this new set, any song was fair game. Let’s walk through them, one-by-one.

The instrumental “My Back Pages” was too excellent an opener to omit from the CD. While the final chorus proclamation was either inaudible or not present on other recordings, this version from Jackson presents it clearly.

“I’m Ready” is a swinging Willie Dixon cover. Prior to finding this clean tape from New York, I had not heard a high quality recording and it does not disappoint. It sounds surprisingly like Dylan’s later original composition, “Beyond Here Lies Nothin’.” It's also hard not to hear significance in the lines "I been looking for heaven / Ain't found it in this world at all" in light of later recordings from 1979 to 1981.

By the time that Bob Dylan’s 1978 “big band” tour had moved from Japan to the United States by way of Europe, the arrangements had developed significantly. “Shelter From The Storm” was the most changed - it has lost the operatic chorus overture and has instead been given a vocal chorus by the back-up singers.

“Tangled Up In Blue” is yet another beautiful performance of this classic song, introduced as a ballad about three people in love with each other all at the same time. This vocal is the sound of a man telling the truth.

The fifth song, “Ballad Of A Thin Man,” sounds like it was written for this tour. The horns and back-up singers raise the bombastic qualities of this menacing narrative. Plus Dylan’s bizarre introduction about the circus geek is just delightful.

“Maggie’s Farm,” the third and final song from December’s noteworthy Charlotte concert, is a truly rollicking version. The drum interlude seems unique to this night’s performance.

“Going, Going, Gone” is another track that had changed significantly since its appearance on the Spring Japanese tour. The tempo changes and altered lyrics have gotten much more precise.

Track eight, “One More Cup Of Coffee,” is sadly not one that includes this tour’s peculiar introduction. I recommend seeking it out, but the performance on this version was worth the loss. In particular, the rambling conga and piano duet during the song is clearer and stronger here than when it was played at later dates.

“Where Are You Tonight” is played following a self-deprecating remark concerning the sales of Street Legal. Though the track was not consistently performed throughout the year, it is on fire on this recording. The blaring organ is reminiscent of Dylan’s finest 1960s material.

On the other hand, “I Want You” is both a song that was consistently performed in 1978, and one that doesn’t sound a bit like Bob Dylan’s 1960s recordings. The song is performed here as a vocally centered ballad. The singer’s brief improvisation on the final chorus is reminiscent of his beautiful renditions of “Nobody ‘Cept You” from 1974.

“Masters Of War” is the prototype for how the song would be played until 1994’s acoustic revision, and is a scathing performance. The guitar work is so powerful that the band picks the song back up for a brief encore.

This iteration of “To Ramona” sounds like what the song could have been like on Dylan’s 1966 tour. The lyrics are spat out with gusto and swelling instruments fill in between verses.

“All Along The Watchtower,” which is often performed with driving guitar, is instead propelled here by a fiery violin. David Mansfield, as ever, is ready to rise to the occasion.

The rarely played “All I Really Want To Do,” is one of the greatest successes of Bob Dylan’s 1978 World Tour. Played from the beginning of the year to the end, it is pushed along by a buoyant saxophone and largely improvised lyrics. From night to night, they vary, but are generally along a pretty whimsical central line of being… ‘friends’ and nothing more.

I don’t tend to include band introductions, but this is an exception. Among the other wacky intros, Dylan introduces his back-up singers as his ex-girlfriend, current girlfriend, and fiancee. David Mansfield is described as knowing nothing about smoking dope, drinking whiskey, or chasing women. The singer sums up the more decadent aspects of the tour by following up this comment with the off-hand remark, “he’s learning, though.”

“It’s Alright Ma” is fascinating, in that it bears a striking resemblance to the arrangement played in 2007. Besides that, the song is quite a firecracker in its own right, sounding shockingly like you could be hearing a lost tape from 1976.

Finally, the set wraps up with a beautiful performance of “Forever Young.” As Paul Williams wrote, this song can sometimes sound a bit too anthemic, but comes straight from the heart on this night.

A note about the concerts: 1978 offers one of the more varied and eccentric sets of recordings, as far as sound profile is concerned. The setlist changed little from night-to-night, but the recordings sound radically different. My preference is for December 9’s Columbia show, as the sound is compressed into utter immediacy. The Carbondale show from October 28 is probably the clearest tape. November 28 would be better represented here, but is a bit quieter than the other nights and did not fit well between the other songs on this compilation.

For the avid collector, I strongly recommend seeking out complete tapes from the concerts represented in this compilation. It was a tight run between nightly performances, so the track was generally chosen from two to three worthy alternatives. It’s a pretty entertaining tour overall, descending into some pretty outrageously over-the-edge nights, before Dylan converted that energy into his powerful gospel shows the following year.

Email ThisBlogThis!Share to TwitterShare to FacebookShare to Pinterest
Labels: 1970 - 1979, Live

Back In The Rain: Unreleased Live Recordings, 1976 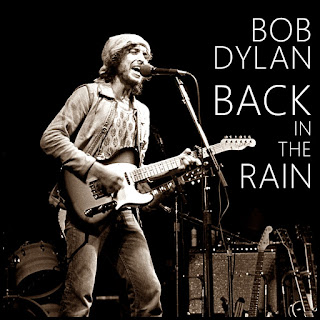 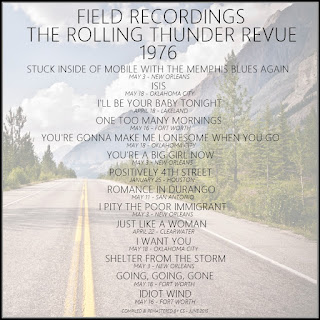 Back In The Rain
The Rolling Thunder Revue - 1976

The personnel were similar, but the sound had changed radically. Gone was the standard setlist, replaced by a rotating set of songs. The emphasis had been altered from Dylan’s recently released Desire record to include a wider variety of songs, particularly from Blonde On Blonde and Blood On The Tracks.

1975’s more imaginative arrangements featuring congas, mandolins, and violins were largely replaced by distorted guitar, sometimes featuring a slide. Dylan himself took over lead guitar duties on occasion, though the band included such late twentieth century notables as T-Bone Burnette and Mick Ronson. Piano remained a significant force in the arrangements, as found on this compilation on “I Pity The Poor Immigrant” and “You’re A Big Girl Now.” The violin was still present, and is particularly fierce here on a raucous one-off performance of “Positively 4th Street.” Dylan doesn’t recall all of the words, but the song has lost none of its punch in the ten years since it was last played in concert. “I’ll Be Your Baby Tonight” is also rather endearing, presented as an appropriately boozy rendition.

Several of the songs here are earlier performances of those that would appear on Columbia’s official document of the tour, Hard Rain. They tend to lack the harsh power of those later shows, but make up for that loss with more nuanced vocals. “One Too Many Mornings” has not yet picked up the extra verse that it would by the end of the tour, and “Shelter From The Storm” features one of Dylan’s strongest voice performances.

While at the beginning of the tour, as found in the original un-aired Clearwater TV special, “Isis” had lost much of the punch that it had the previous year, it had picked up a radical new arrangement by mid-May. The version from May 16 seems to have been transitional, as that recording suggests a slow song that shifts tempo after a verse or two. By May 18, when the version on this set was recorded in Oklahoma City, the song was a fully rollicking, uptempo tune.

The bonus cuts here were found to be wanting in one way or another. All were very rare performances, but the sound quality on “Most Likely You Go Your Way” and “One Of Us Must Know” is very poor. “A Hard Rain’s A-Gonna Fall” is interesting, and more traditional in arrangement than the bluesy version from 1975, but suffers from its increased length.

Since the songs are longer, not as many could be featured from the tour. Not present are any of the fantastic acoustic performances that tended to open the sets. You can find many of the best ones on other Thousand Highways collections.

I hope you enjoy the compilation. It’s been fun, but was fairly tough to assemble. The wide variety of quality in tapes from the second Rolling Thunder tour was challenging to arrange without presenting jarring transitions between songs. Hopefully, I’ve been reasonably effective in doing so. Here’s my one recommendation: play it loud.

Next month, we will be skipping ahead ten years to Bob Dylan's 1986 tour with Tom Petty and the Heartbreakers. While their more experimental 1987 tour has been featured on this site before, 1986 has been documented only through a handful of cuts on Ashes & Dust and the One More Night releases. Get ready to receive a healthy dose of Dylan's rockabilly renaissance, with an emphasis on his covers and contemporary songs of the 1980s. Until next time, keep yourself healthy and listen to some good tunes.