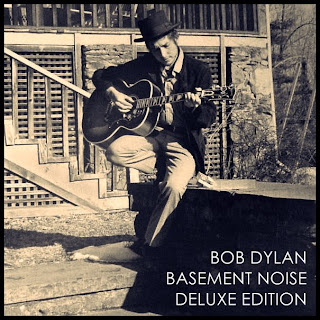 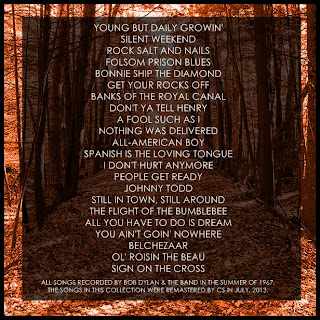 Links:
[removed due to official release - see note at bottom]

The Basement Tapes are an open secret: this music is a goldmine, and remains surprisingly unreleased. Bob Dylan and The Band took some time in New York to record many traditional and new songs in the summer and fall of 1967. The results could not be more different from Blonde on Blonde and their 1966 tour: these songs were laid back and rootsy, clearly marking the way ahead for both Dylan and the other performers.

The best and most complete set of recordings is the Tree with Roots 4-CD collection, from which this collection is drawn. They are frequently mixed to isolate the voice to one of the two channels, which does not sit well in my ears; I should say that many do appreciate this aspect of the set. I remixed them from the FLAC files to suit my taste, and perhaps yours. I've been working on this one for quite some time, and I hope that it comes across well.

These songs comprised, in my opinion, the best of the set that was not fragmentary, noisy, or fairly close to the released set. Some are traditional, some are country songs, some are gospel-influenced, some are folk songs, some are American, some are not, and some come only from the mind of Bob Dylan and The Band.

Young But Daily Growing is especially haunting, and Don't Ya Tell Henry is especially raucous. The rest of the songs fall somewhere in between. Personal favorites include Ol' Roison The Beau (whatever that means), the Flight of the Bumblebee, and You Ain't Goin' Nowhere. The idiosyncratic lyrics of this last one really elevate the madness of the song - it stands as representative of the seemingly absurdist lyrical streak that characterized these sessions.

Most of the best songs that did not make it to my compilation did not do so because they have been officially released. If you like this collection, and have not yet heard the official release of the Basement Tapes, check it out as soon as possible using the following link:
The Basement Tapes

As always, all but the soundtrack are bobdylan.com links, but you can find these tracks and more at Amazon, iTunes, or your local record store.

NOTE: I was recently informed that this compilation runs three seconds too long for a single disc. Part Two has been edited to be five seconds shorter, so it should be able to fit on a single disc if you download Part Two a second time. Sorry!

NOTE #2: Everything on this set is going to be officially released worldwide on The Bootleg Series Volume 11: The Basement Tapes in November 2014. Consequently, I have removed the music links on October 31, 2014. I will leave up the playlist, though, so you can assemble your own version using the beautifully restored tracks sold by Sony/Columbia Records.
Posted by CWS at 10:07 PM 5 comments:

Email ThisBlogThis!Share to TwitterShare to FacebookShare to Pinterest
Labels: 1960 - 1969

I hope all is well out there in cyberspace.

For some time, I have been "publishing" compilations of Bob Dylan field recordings and outtakes on expectingrain.com. That has been rewarding, and seems to have brought some small amount of joy to the world.

The two years or so that this project has taken have been fruitful, and I'd like to share the compilations with a wider group of people. That, of course, is where this blog comes in.

Over the next several months, I hope to post the full collection of tapes, which span the years 1965 - 2013. I will also do my best to link to retailers so that you might purchase the official Columbia releases which relate to these posts.

I can't say strongly enough that I disagree with piracy, and encourage listeners to purchase available recordings through legitimate stores. All recordings found here are unreleased, and no money should be paid to anyone but the artist/record company for these songs. If the links found herein contain anything which could be purchased elsewhere, or otherwise cause offense, please send me a message and they will be removed ASAP. I claim no rights to these recordings, or my edits of them.

Please post comments as you see fit, and most of all: enjoy! There is a wonderful appreciation of truth and beauty to found in the art etched upon these ones and zeroes.
Posted by CWS at 7:10 PM 8 comments: