So just to keep everyone in the loop: there will be a new compilation published in June, but it will not be the concluding chapter of A Thousand Highways. In fact, I was so inspired by the exciting new tapes from Japan that I collected the best performances into a 2-Disc set, which will be released on June 1, 2016. Apologies to anyone who was looking forward to my miscellaneous recordings compilation - you'll just have to wait until July. Everyone else, check back in on June 1 for some brilliant new tracks from Bob Dylan's 2016 Tour of Japan.

Thanks for listening,
CS
Posted by CWS at 9:50 AM 8 comments:

Email ThisBlogThis!Share to TwitterShare to FacebookShare to Pinterest
Labels: Notes 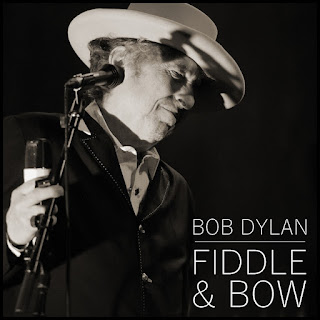 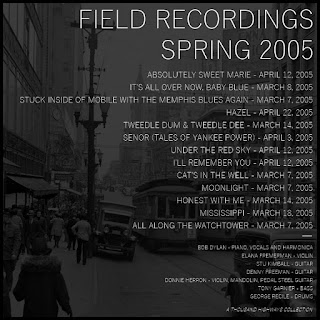 This is a truly superlative set of songs. In the Spring of 2005, violinist Elena Fremerman had joined Bob Dylan's band for a tour of the United States, and she contributed significantly to the overall sound of the band. At the same time, recording technology had progressed to the point of capturing audience recordings that often surpassed the soundboard tapes of previous decades. These factors combined to offer one of the most coherent, compelling compilations yet presented on The Thousand Highways Collection.

Highlights include the best renditions of "Absolutely Sweet Marie," "Honest With Me," and "Mississippi" ever played outside of a studio setting. "It's All Over Now, Baby Blue" is played with a vocal unrivaled since it had been played in the mid-1990s. The collection also includes a rare outing of "Hazel," including a pleasant violin interlude. Outside of these highlights, the remainder of the songs prove quite strong as well - "Stuck Inside of Mobile," "Moonlight," and "Tweedle Dum & Tweedle Dee" are enhanced not by violin solos, but rather by the presence of a violin on their rhythmic sections, propelling the tracks along delightfully.

A handful of tracks didn't make it past the cutting room floor. "Folsom Prison Blues" was played to great acclaim in Reno, but I didn't think the vocals measured up to past outings of this classic. Similarly, "Sing Me Back Home" is an extraordinary song, but I didn't think it quite came together in the performances. I hope you'll forgive these omissions.

While Fremerman would depart the band at the end of this brief tour, the violin sound lingered on, thanks to the presence of multi-instrumentalist Donnie Herron. Never again, though, would it have such a prominent role. Luckily, due to our community's generous tapers, we've been left with extraordinary documentation of this unique period in Bob Dylan's performance career.

This will be the last entry in the chronological set of compilations that made up the second series of The Thousand Highways Collection, but I should have a set of remaining odds and ends to release next month as a 'best of the rest' affair. Until then, keep yourself healthy and listen to some good tunes!

Thanks for listening,
CS