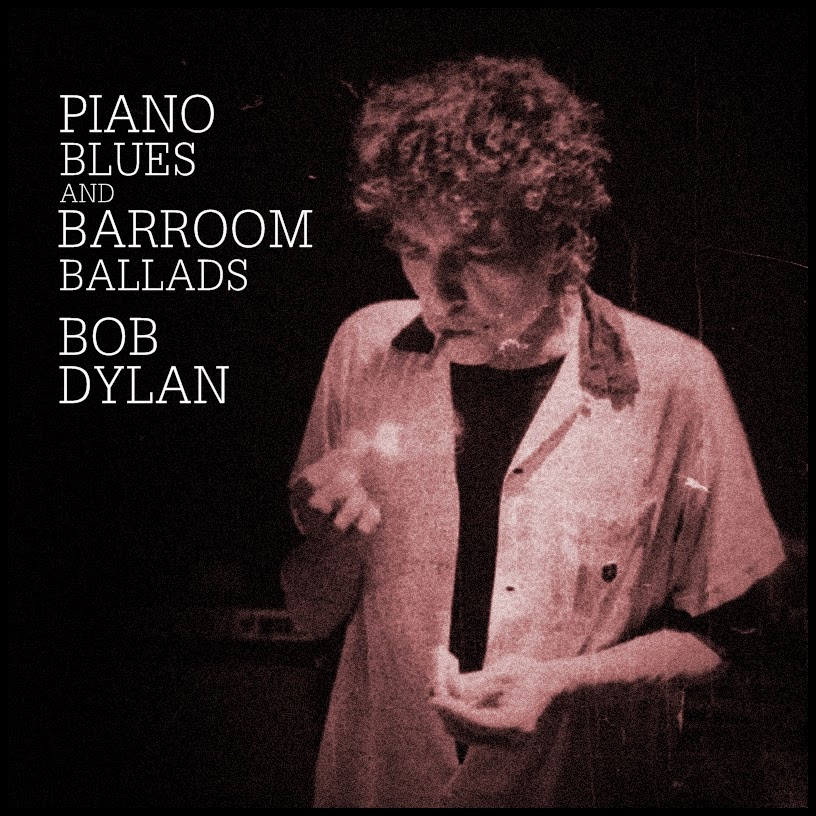 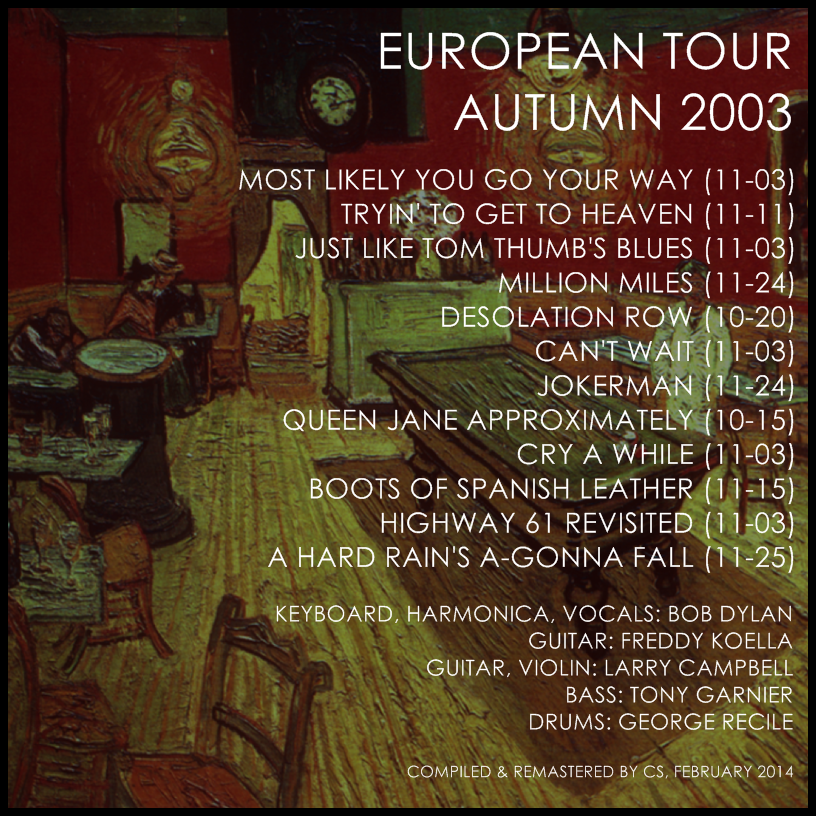 This is undoubtedly my favorite leg of the Never-Ending Tour. Though 1995, 1999, 2002 and 2013 give it a fun for its money, this tour is the best representation of my ideal sound. That said, it is not for everyone.

Much as in 1987, Dylan is all over the place here. From the relatively consistent vocals of 1999-2001, things have changed quite a bit. Many fans found his singing problematic during the 2003-2004 era, and that's reasonable. A strong growl and rasp crept in, as is audible in many of the recordings here. What is especially fascinating, however, is the alternation between different vocal styles.

"Tryin' To Get To Heaven" presents a deep growl, while "Boots Of Spanish Leather" finds the singer in an almost crystal-clear moment. Similarly, while Dylan howls in Berlin with "Desolation Row," you can hear the startling knifelike edge of the lyrics in "Can't Wait." It is that sense of being on the edge, of the craftsman struggling with his imperfect tools, that enhances the drama of this set.

Every song on here is a treat, though. This speaks to what I most want to hear in Dylan's live performances: an artist on the edge. In each of the tracks presented, the sound threatens to fall apart. Even so, they keep it together. The band and the singer are exploring new angles to classic songs old and new. I mean, just listen to the sarcastic sneer of the opening songs, in which the singer notes "You say you've got some other kind of lover and yes, I believe you believe you do." The broken howl of the final chorus in "Tryin' To Get To Heaven" is a fleeting highlight before "Just Like Tom Thumb's Blues" returns the set to a jauntier nature. Koella's guitar is the standout on so many of the songs here, but he's really laying on the beautiful flamenco flourishes in "Tom Thumb." "Million Miles" brings out the jokes, as Dylan follows up the line "I don't tell them everything I knew" with an off-mike "I just tell 'em some of it." You can just hear the weariness coming through in every moment of this song. Then, with "Desolation Row," the band is aiming for new heights and they hit them. This is a looser rendition of the song, and I prefer the more nuanced performance from Dublin '03, but the sound quality and passion of this recording could not be rivaled. "Can't Wait" puts the listener immediately in the same, post-midnight neon haze of an urban landscape, with Dylan sounding knowledgeable about those "on their way up," and those "on their way down." His reading of the line "the air burns" is so evocative. "Jokerman" contains the most inventive rhythms of the set, as Recile plays his heart out. "Queen Jane Approximately" is a towering monument to what a dedicated artist can do onstage. This is exquisite, and seems to contain all the heartache and desperation in the world, with the band and their leader totally in-sync. The vocals threaten constantly to break, and sometimes they do, but it adds to the masterpiece being presented to the audience. "Cry A While" is the polar opposite, a real barn-burner with some inspired growling. If you don't care for Dylan's rasp, you won't like this one; on the other hand, if you're like me it's just perfect. From that song, the band moves the music into a unique, almost baroque arrangement of "Boots Of Spanish Leather." Far from the introspective versions of 1995 or 1999, this one flows along as though the singer were narrating it with all of his hope and eventual anger plain to read. "Highway 61" is, like "Queen Jane," a definitive live performance; never before or again were these songs as powerful as they were on these nights, at least to my ears. Finally, the set closes with a transcendent, triumphant "Hard Rain's A-Gonna Fall," building to a crescendo in the final chorus.

My opinion on these songs is not objective, nor should anyone expect it to be. I am no critic, and I can only compile the songs I love and report on them subjectively. And this record sounds incredible. Part of that is the quality of recordings - for reasons I am unaware of, the clarity of the recordings collected here is almost unparalleled. This is not to disparage other tapers; many tours have stand-out recordings. I am just surprised at the sheer volume of quality recordings from Fall 2003.

As you can tell from reviewing the dates of the recordings, my favorite show from the leg is November 3. This concert is top-notch from beginning to end. Though most nights of this tour, like any other, were uneven, I think Bob Dylan landed the mark with the twelve tracks found on Piano Blues and Barroom Ballads. If I could keep just one of the compilations presented on A Thousand Highways (and thank goodness I don't), it would be this one.

For the people who want to hear the song purely as it was played, you may be disappointed to find slightly truncated versions of "Most Likely You Go Your Way And I Go Mine," "Just Like Tom Thumb's Blues," and "Boots of Spanish Leather." To accommodate the runtime, something had to go, and I think those tracks hold up just as well with missing instrumental passages. Note that the only vocal loss is the final repeated verse and chorus of "Most Likely." This is because the song loses its momentum, and is served better (to my ears) by the shorter cut. I am sure some listeners disagree with this decision, and will be happy to find extended cuts of these three songs in their own folder within the download. Similarly, a handful of bonus tracks round out the set. These consist of some notable performances ("Romance In Durango" chief among them) that are interesting, but which I didn't think met the quality of the other tracks recordings presented.

This tour contained all the passion and power of a true performing artist. I hope you will find as much to enjoy on this release as I do.

You can find original studio recordings of these songs on the following records:

Next week you will find a compilation of the best performances from Bob Dylan's Spring 2004 American Tour. As you can guess, I rather enjoy the Koella/Campbell band. The sound of the next release is quite similar to this week's collection, but with an arguably more eclectic selection of songs. Until then, keep yourself healthy and listen to some good tunes.