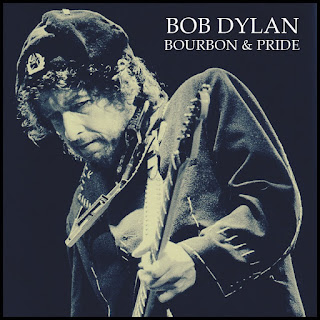 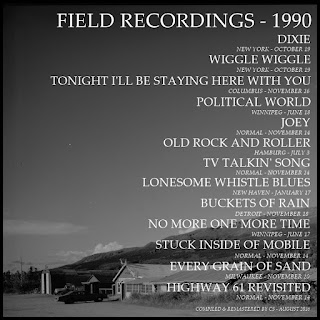 An earlier entry in the Thousand Highways Collection compiled the best recordings from Bob Dylan's 1990 residencies in London and Paris, but as I listened to recordings from throughout the tour in preparation for the upcoming collections of curiosities and miscellany, I was struck by their sound. The popular narrative holds that the shows peaked in January and went downhill from there, including a brief stint of auditioning new guitarists onstage; even so, I found that there were many outstanding concerts from throughout the year. In particular, the show in Normal was a highlight.

Gathering the recordings, I found that a full length CD ended up feeling exhausting. The performances here are uniformly excellent, but listening to Dylan's "take no prisoners" 1990 style for an hour and twenty minutes managed to lessen the charms. As such, this is an uncharacteristically short collection, clocking in at just under an hour.

Within that hour, though, I suspect you may be shocked how great Bob Dylan and his band sound. They took the rough aesthetic of 1989 and honed it into an increasingly muscular style throughout the year. At the same time, they began performing increasingly surprising cover songs - "Old Rock And Roller," "Lonesome Whistle Blues" and "No More One More Time" feature prominently here, but other songs performed throughout the year included "Sitting On The Dock Of The Bay," "Nowhere Man," "My Head's In Mississippi," and "Old Macdonald." On the subject of that last song, too, Dylan and the band opened most of the Autumn shows with a brief instrumental cover; that portion of the set is represented here by "Dixie," which the singer would go on to perform vocally twelve years later for the Masked and Anonymous film.

I've spliced together "Dixie" and "Wiggle Wiggle" from the same show, since I think the latter track works well as an opener and remains very rarely performed. As you can imagine, it towers over its much-maligned studio rendition. "Political World" is a version of the song that I was clued into by a fellow member of the Expecting Rain website, Nellie, and is as good as the song ever sounded outside of Daniel Lanois' New Orleans "studio." The guitar riff built by G. E. Smith is quite groovy.

"Joey" features one of my favorite song comments by the singer, as he remarks afterwards that "that was about a guy named Joey." The following track, "Old Rock And Roller," features about as much pathos as Bob Dylan could put forth on-stage. As he introduces it, "if you ever wondered what happens to people like me, here's a song that'll tell you about it." The song, originally written by Charlie Daniels for a 1989 album, tells the story of a musician who has been trying and failing to replicate the success of his 1960s recordings. My compilation's title, Bourbon & Pride, comes from (what I hear in) a line from this song - "he's been living thirty years on bourbon and pride." There isn't any simple outcome in the story, but its conclusion reminds the listener of Bob Dylan's own conclusion in 1987 that he was determined to stand on-stage in spite of his artistic challenges.

"TV Talkin' Song" is intriguing, as it sounds closer to the circulating outtake of that song than the final version released on Under The Red Sky. "Lonesome Whistle Blues" represents the only appearance of a song from the noteworthy live rehearsal at the Toad's Place venue in New Haven. Unfortunately, only the middle verse is fully remembered, but I think the song comes across regardless. Another good version of this was played at 1989's tour rehearsals, but this performance is the superior one. As one may imagine from its inclusion here, I also believe it to be the best song featured at the aforementioned live rehearsal in New Haven - while the recording quality of my copy of that set is quite nice, the performance is pretty much what you would expect from a rehearsal.

"Buckets Of Rain" already appeared on an earlier miscellaneous compilation, but I thought it too good not to include here. It is, of course, the only live performance of the song, and Dylan rises to the occasion with some inspired harmonica and a delightful unwillingness to let the song go when the band finishes playing the first time. "No More One More Time," written and originally recorded by Cajun accordionist Jo-El Sonnier, provides one of the strongest vocal performances of the album. Dylan had clearly connected with this recent song, singing it a handful of times in 1990 and again fourteen years later in 2004; this one was the best of the bunch.

"Stuck Inside Of Mobile With The Memphis Blues Again" tends to be played well by its composer, but this version is especially strong. It sounds like a bolt of lightning, and you shouldn't be embarrassed if you're inclined to hit the repeat button when it's over! The next track, "Every Grain Of Sand," is probably the best song on this compilation. After performing interesting but somehow incomplete versions over the course of the preceding decade, Dylan finally connects with the song here in a way he hadn't since its initial recording. The band, too, offers delicate, sympathetic backing without losing their essentially garage-rock style. Finally, the set closes up with a characteristically rocking "Highway 61 Revisited," featuring plenty of roaring slide guitar

If you don't connect with this material, don't fret - you're in good company. 1990 was not the singer's strongest year, but I'll be darned if I don't find myself nodding along and getting thoroughly jazzed by these thirteen songs. This is Bob Dylan on the edge, and that's often when he finds the most interesting way to sing his songs.