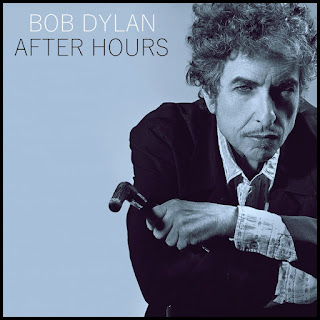 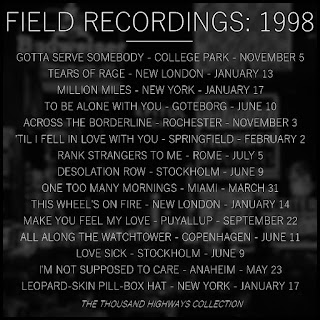 As with the preceding ten years, Bob Dylan set out on tour again early in 1998. Despite early concerns, the year turned out much better than folks had expected. Dylan and his management had set up several high-profile tours with other big names in the music business, including The Rolling Stones, Joni Morrison, and Van Morrison. While this could have led to a paint-by-numbers, phoned in series of concerts designed to check a box for disinterested concertgoers, the singer instead rose to the occasion of giving everyone quite the bang for their buck, so to speak.

The compilation kicks off with a raucous, call-and-response rendition of "Gotta Serve Somebody," always one of my favorites. A menacing, guitar-heavy "Tears Of Rage" follows. David Kemper's drums are brought to the forefront of the following two songs, as he and the guitarists first lay down an off-kilter jazz backing to "Million Miles" and then a thumping, high-energy arrangement of Nashville Skyline's "To Be Alone With You." This last is a song that often falls short of its potential, but on this Scandinavian summer night, it comes alive as it did back in 1969. A rare late 1990s outing of "Across The Borderline" follows, with Dylan pouring his heart and soul into the borderlands tale, and then the first electric set draws to a close with a characteristically groovy "'Til I Fell In Love With You."

"Rank Strangers To Me" showcases the bluegrass-flecked harmonies of Larry Campbell and Bucky Baxter before Bob Dylan and the band move into an epic arrangement of "Desolation Row." The acoustic set is finished with an appropriately laid back, bass heavy ballad, "One Too Many Mornings."

The second electric set opens with the second Basement Tapes song of the collection, "This Wheel's On Fire." The song had just debuted in concert a couple years before, and Dylan's playing it for all it's worth by 1998, utilizing his backing band's vocals to great effect. Next is a much more recent hit, "Make You Feel My Love." This song would go on to be something of a disappointment in later years, as the dreaded upsinging often destroyed the song's natural charms, but here it is an unblemished beauty, superior even to the lovely album recording. Surprisingly, Dylan played organ on the song sometimes in 1998, but none of those recordings compared to this one. A very unique cascading arrangement of "All Along The Watchtower" follows; as far as I know, it was only played this way on the Summer 1998 tour. "Love Sick" is the next song, and it's clear that the song has already evolved from its 1997 incarnation - the band members are tight, sharp, and allow Dylan to showcase some snarling vocals. A tender performance of Gordon Lightfoot's "I'm Not Supposed To Care" is the penultimate track, followed by some straightforward bluesy fun in "Leopard-Skin Pill-Box Hat."

Concerning the recordings, 1998 is a really great year. Perhaps moreso than any other year from the 1990s, the recordings from these tours are spellbinding and beautifully mixed. I had to do very little production work for the compilation. The band was tight, and unlike preceding years, no meandering instrumental sections robbed the songs of their power. The result is a distinctly unified, strong collection of tracks.

Next month will bring 2001, which I haven't yet got finalized. The tracks are still pretty up in the air! Excitingly, 2001 brought the release of my favorite Bob Dylan record, Love & Theft. So expect a few live renditions of those songs, if nothing else. I'll try to get up another DIY Playlist this month too, so be sure to check in around March 15th.

Note: This description was edited to reflect that it is actually Bucky Baxter, not Charlie Sexton, who is singing backup with Larry Campbell on "Rank Strangers To Me." A kind listener alerted me to this fact.
Posted by CWS at 12:00 AM