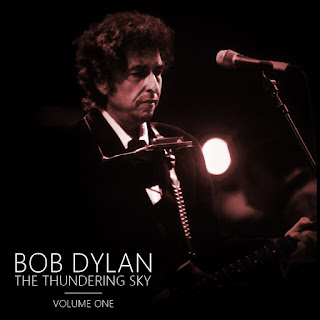 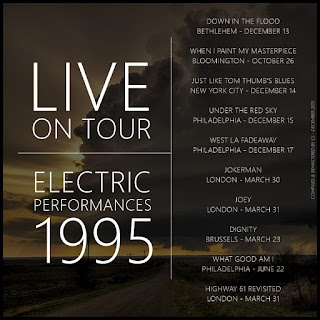 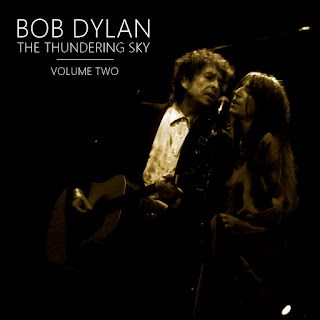 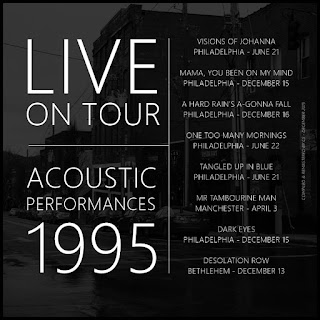 I hope listeners are ready for some powerful electric performances and some deeply meditative acoustic renditions, because this collection has those in spades.

The Never-Ending Tour rolled steadily through the 1990s, but after shifting from a garage rock sound to a jazz-like aesthetic by 1992, it evolved once again into a heavy rock sound by the middle of the decade. It would change again before 2000, but the only documentation of this ‘heavy’ period in the Thousand Highways Collection so far has been a compilation of the Prague residency in March, 1995. While that residency was a high point of the year, so many more were still to come.

In the electric set, the most notable performances are likely “West LA Fadeaway,” “Dignity,” and “Joey.” The first was a Grateful Dead song that Bob Dylan had been playing at his concerts from the early 1990s, but it really came into its own in 1995. While it was also performed in a semi-acoustic arrangement at Dylan’s unique Fort Lauderdale covers show earlier in 1995, this rendition from the winter tour presents the song at its most elemental. The central riff is in place, and loops throughout the painted picture of Los Angeles’ seedy underbelly. “Dignity,” which was something of a minor hit due to its inclusion on Greatest Hits Volume Three and the MTV Unplugged show, was played intermittently on the 1995 tours. It took some time to find its footing, and would only achieve its full potential a decade later in 2004, but this performance from Brussels is a beautiful, smooth treatment of the song. It’s a little more lively than its studio arrangement, and benefits from the looser style. Finally, this version of “Joey” from London is one of the most stirring performances of the Desire centerpiece. Dylan really lays into the vocals, and though he’s not word-perfect, the passion of the singing and the crunch of the guitars carries you fully into this contentious mobster ballad.

The acoustic set is anchored by “Visions Of Johanna,” “A Hard Rain’s A-Gonna Fall,” “Dark Eyes,” and “Desolation Row.” The first is often spoken of as one of the song’s best outings during the 1990s. The singer’s fully committed, and presents the song with the precision he afforded it back in 1966; his unique way of singing the iconic lines “the ghost of electricity / howls in the bones of her face” is one highlight among many. “Hard Rain” is provided one of the more fascinating arrangement I’ve heard - while the song starts in a typical style, a baroque guitar riff becomes more present as the song continues, spurring Dylan into more curious vocal styles. It has to be heard to be believed, and gives the long song an evolving dynamic to pull the listener in. “Dark Eyes” had previously been played live only once, in a truncated fashion, on Bob Dylan’s 1986 tour. Patti Smith, for whom Dylan had arranged his rare December tour, requested the song specifically, and it was played as a duet throughout the brief stint. It was performed to varying degrees of success, but this rendition from Philadelphia stands out as the best of the recordings available. At last, “Desolation Row” acts as an apt conclusion to the compilation. I’ve heard that author Clinton Heylin has claimed this as the best performance of the song, and you’d be hard-pressed to better it. It really is something of a journey, and the listener will no doubt be compelled to stick with the narrator clear through to the end.

Normally, as the consistent visitor will know, I don’t like to present a tour’s acoustic and electric portions separately. In this case, though, I made an exception. I found that including three acoustic performances on the electric disc truncated the set conspicuously, and it seemed to diminish the power of both styles. In the end, I settled on a full-running electric disc and a briefer acoustic disc, which would be suitable for different occasions. The electric set rocks, ideal for a commute, a workout, or some other kind of activity; the acoustic set, soft and confessional, would be preferable for an evening’s drive in the country or relaxing with a glass of wine after a long day. However you choose to enjoy these songs, I have no doubt you’ll enjoy them quite a bit.

On a humorous, informal note, did anyone notice that the first four songs on Volume Two are from different dates in Philadelphia? Shows from that city make up a full 75% of the songs on the acoustic set! I wonder what was going on in Philadelphia that year that added up to excellent recordings married to excellent performances.

Next month will see the appearance of a long-overlooked year on this website. By popular demand, 1996 will finally be getting its due. It gave us Bob Dylan's spectacular reading of "Shake Sugaree," but it really gave so much more. Check in on January 1 for the full exploration of this content. Until then, keep yourself healthy and listen to some good tunes.