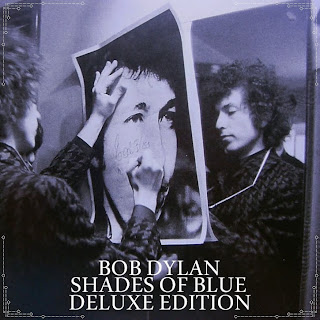 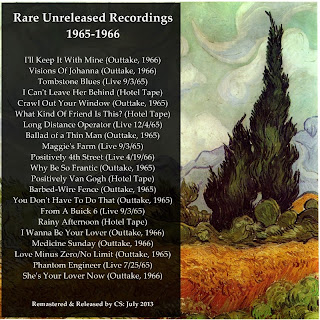 
Here's the first compilation. I've worked on it for some time, and though I'm not entirely satisfied, it is very listenable. Included are outtakes and live performances from Bob Dylan's 1965-1966 sessions and tours. Edits have been kept to a minimum, and the volume has been adjusted to favor continuity.

1965 to 1966 was an extremely fertile period for Dylan's career, but much of the best available songs have been released officially in one form or another. Surprisingly, neither this outtake of Visions of Johanna or this Newport performance of Phantom Engineer have made it to a Columbia release. Similarly, the brilliant solo take of She's Your Lover Now was fair game.

This is an extensive expansion of an earlier compilation, Shades of Blue, which contained all of the hotel tapes from 1966. Only the best of these hotel tapes have been included on this collection. The sound quality of these is inconsistent, but tends towards poor. They are present here both for historical interest, as none of them made it to the studio as far as we know, as well as for their wonderful melodies. These function in some ways as an indication of what Dylan's next record may have sounded like had he not moved in a very different direction after the 1966 tour.

Speaking of that most notable of rock tours, the savvy listener may find that songs from Dylan's 1966 world tour with The Hawks are conspicuously absent here, with the exception of Positively 4th Street. These are extremely well-represented on the Bootleg Series Volume 4, available for purchase. The standard setlist makes inclusion here less important than these other songs which did make the cut, and space is so limited. Positively 4th Street was the only track in listenable quality which did not find its way onto that official release.

Hopefully you will find something enjoyable here, and it would make a pleasant starting point for those who have already heard all of the officially released tracks. For those who have not, I encourage you to buy those recordings as soon as possible - they are wonderful.

If you like this, I would encourage you to check out the following records by the artist, available at bobdylan.com, amazon.com, and iTunes:

Note: All links here are to bobdylan.com, but these recordings are available at Amazon, iTunes, and possibly your local music store (if it still exists).

UPDATE - November 2, 2015: The links for this compilation have been removed, since most of the tracks are being officially released by Sony/Columbia later this month as The Bootleg Series Volume 12: The Cutting Edge. The record company has happily made available three separate tiers for this release, which you can learn about in more detail here. I, for one, would love to get the 18 CD set, but have a mortgage to pay and mouths to feed, after all; the 6 CD collection will have to do! As I did previously with the Basement Noise compilation, I will leave the playlist above for those of you who would like to make your own version using tracks from the new official release.
Posted by CWS at 8:15 PM